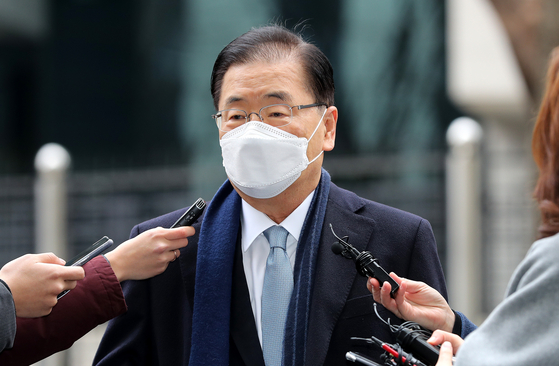 Chung Eui-yong, a former director of the Blue House National Security Office who was named foreign minister, is surrounded by reporters in front of the Foreign Ministry building in central Seoul Thursday. [NEWS1]


The Ministry of Foreign Affairs underscored that reviving North Korea-U.S. dialogue is a top priority in its policy report on major diplomatic tasks for 2021 released Thursday.

In the report to President Moon Jae-in, the Foreign Ministry stressed that it will work toward arranging an early summit between Moon and newly inaugurated U.S. President Joe Biden, and other high-level exchanges, to try to revive negotiations with the North.

As it enters its fifth year, the Moon administration has signaled its intention to push key initiatives, in particular the so-called Korean Peninsula peace process after denuclearization talks collapsed at the second North-U.S. summit in Hanoi, Vietnam, in February 2019.

The ministry said it will work to establish a framework for consultations with the new U.S. administration at an early date and make efforts to “set the foundation for substantive progress in the denuclearization progress and achieve tangible results.”

To ensure stability in the region, South Korea, through close coordination with the United States, will also cooperate with other key players in the region including China, Japan, Russia and the European Union to send a consistent message to the North.

The Blue House on Wednesday named Chung Eui-yong, a former director of the National Security Office, who played a key mediating role in North Korea-U.S. negotiations, as Seoul’s new foreign minister, to replace Kang Kyung-wha, who has served as the top diplomat since the onset of the Moon administration in 2017.

Chung told reporters in front of the Foreign Ministry Thursday, “The diplomatic situation is difficult, so I feel a heavy sense of responsibility.”

He said that if he is confirmed, “I will do my utmost to complete the foreign policies carried out by the Moon Jae-in government thus far and to enable the Korean Peninsula peace process to take root.”

In the report, the Foreign Ministry outlined its plans to continue diplomatic efforts to realize peace on the Korean Peninsula, play a role as a middle power to bring together countries globally and practice people-centered diplomacy.

The ministry will prepare for the 30th anniversary of Korean and Chinese bilateral relations next year with a series of cultural exchanges. It is encouraging a visit to Korea by Chinese President Xi Jinping, though officials say that will depend on the Covid-19 situation.

The ministry also adhered to its commitment to maintain a two-track approach with Japan, to separate history disputes stemming from the colonial era (1910-1945), including the wartime forced labor and sexual slavery issue, from areas of bilateral cooperation.

The report said that Korea will continue to “manage” Korea-Japan relations but doesn’t elaborate much on how to resolve the tensions as Japan protests several Korean court decisions on the compensation of victims of Japan’s colonial rule.

A high-level Foreign Ministry official said the two countries have appointed new ambassadors to Seoul and Tokyo, and that each of the diplomats have “special affection and capabilities in dealing with Korea-Japan relations." He said that while in-person visits are difficult amid Covid-19, "through the embassies, we will hold continued deep discussions on various issues."

The ministry will likewise work on a visit by Russian President Vladimir Putin to Korea, and push for other high-level exchanges.

The ministry also pledged to play a leadership role in international efforts to overcome the Covid-19 pandemic and in the global recovery process.

It stressed the importance of protection of overseas Koreans. The Act on Consular Assistance for the Protection of Overseas Korean Nationals, which came into force last Saturday, requires diplomatic missions to provide swift and adequate help to Korean citizens abroad.

Korea is also preparing to host the P4G Summit on climate change from May 30 to 31 after it was postponed last year because of the pandemic.