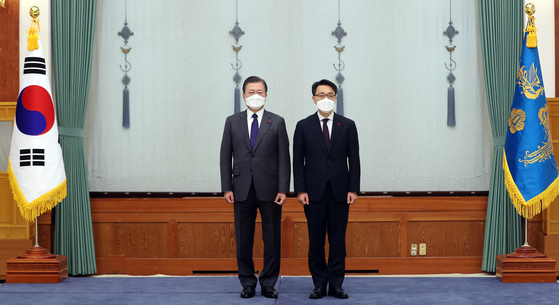 President Moon Jae-in, left, and Kim Jin-wook, head of the new Corruption Investigation Office for High-ranking Officials, pose for a photograph at the Blue House on Thursday. [YONHAP]


Korea launched an independent anticorruption agency with vast authority to crack down on erring high-ranking officials, a milestone in a decades-long campaign to rebalance the country’s law enforcement agencies.

President Moon Jae-in formally appointed Kim Jin-wook as the inaugural head of the new Corruption Investigation Office for High-ranking Officials (CIO) at a ceremony at the Blue House Thursday following the former judge’s confirmation by the National Assembly hours earlier.

Kim will head an agency autonomous from other law enforcement organs, with jurisdiction over some 6,500 senior officials, including the president and his or her immediate relatives; senior presidential aides; the National Assembly speaker and lawmakers; the Supreme Court chief justice and judges; the Constitutional Court chief justice and judges; the prime minister, ministers and vice ministers; the prosecutor general and prosecutors; mayors, governors and education office chiefs; and senior police and military officers.

The CIO’s launch concludes a protracted effort by the ruling Democratic Party to rein in the powers of the state prosecution service, whose insular culture and probes of top politicians have long invited questions about its political neutrality.

The new agency deprives state prosecutors of their monopoly over indictments of top officials, thereby undercutting their influence over politics.

That intent was clear in Moon’s message following Kim’s investiture.

“What is most important for the CIO is its political neutrality and independence from existing law enforcement organs,” the president said, according to Blue House spokesman Kang Min-seok.

Saying the country had “great expectations” for the new agency, Moon called on the CIO to build rapport with other law enforcement agencies and “steadily earn the people’s trust.”

Kim, a former judge and researcher at the Constitutional Court, was appointed after a harrowing confirmation process that followed months of intense wrangling in the legislature over the bill to create the new agency. Conservative opposition lawmakers fiercely resisted the CIO’s launch, accusing Moon of attempting to build an agency to silence his critics.

The new director, who during his confirmation hearing called himself a political moderate with no partisan preference, challenged such accusations in his address at a separate swearing-in ceremony at the Seoul Government Complex in Gwacheon, Gyeonggi.

“I will strictly maintain political neutrality and independence, and carry out fair investigations by allowing no sanctuary in probing corruption by top officials,” Kim said. The agency will carry out investigations “solely for the people,” he vowed.

As to the CIO’s future relationship with the state prosecution agency and police, Kim said the agency would “cooperate when necessary, and place checks when needed.” That remark underscored one of the main rationales for the agency: to counterbalance the power of the prosecution by addressing longstanding accusations that the prosecution service itself was too soft on crimes committed by its own.

Kim will now begin the the task of picking his deputy, who must be approved by a bipartisan panel of seven figures as well as the president. He must also select 23 other prosecutors from a list of figures recommended by the panel. CIO prosecutors must have at least seven years’ experience as an attorney, prosecutor or judge.

He is widely expected to select as his lieutenant a figure who can make up for his own lack of experience in leading investigations.

The agency will have 40 other non-prosecutor investigators, as well as 20 administrative staff members. Kim himself has said this personnel process meant the CIO may only be functional around March, though analysts say political clashes over the appointments could delay it even further.