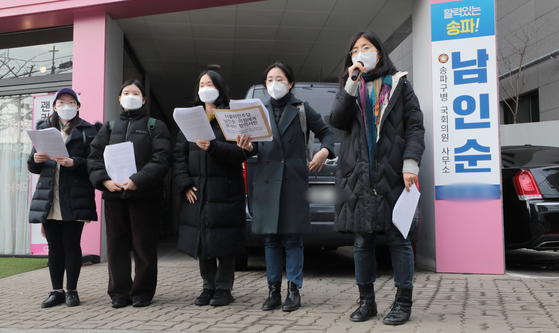 Members of a civic group advocating for the protection of women and their rights hold a press conference in front of the office of Democratic Party Rep. Nam In-soon in southern Seoul on Thursday, demanding her resignation. Nam has been identified as one of several women who were instrumental in informing the former mayor of Seoul that his former secretary may be filing a sexual harassment complaint against him. [NEWS1]

Relatives of the woman who accused former Seoul Mayor Park Won-soon of sexual harassment are demanding an apology from a number of women whose communications may have tipped Park off about her complaint — and led to his suicide.


“The three women — co-head of the Korea Women’s Association United [KWAU] Kim Young-soon, ruling Democratic Party [DP] Rep. Nam In-soon and gender equality special adviser of the Seoul Metropolitan Government Lim Soon-young — did not provide a sincere apology and they are simply waiting for the case to be forgotten,” the victim’s father wrote in a statement released by lawyer Kim Jae-ryon earlier this week.

"By not conveying sincere apologies to the victim, they are trying to cover up what they did."


The three women were questioned by prosecutors after the mayor's death last July and asked if they leaked information to him regarding the sexual harassment complaint.


A former secretary of Park filed a complaint on July 8, 2020 claiming Park made unsolicited sexual advances to her for more than four years, including the sending of late-night selfies and lewd text messages.

Park went missing on July 9, 2020, and was found dead the next day on Mount Bugak in Seoul. Police ruled his death a suicide.

By law, any investigation into Park's behavior was closed due to the death of the suspect. But investigations were launched in August into whether the secretary’s complaint to the police was leaked to the mayor through illicit means ahead of his fatal decision. The investigation closed on Dec. 30 with no charges.

But prosecutors did disclose how information was leaked to Park.

“According to our finding, [a day] before the complaint was filed, the victim’s lawyer [Kim] requested assistance from a civic group regarding the issue, and then some members of this civic group spoke to a lawmaker [who then spoke to] a special adviser [at City Hall] about this,” the Seoul Northern District Prosecutors’ Office said in a statement closing the case on Dec. 30. "The special adviser then informed Park about a possible complaint to be filed against him."

According to prosecutors, lawyer Kim called the head of the Korea Sexual Violence Relief Center, Lee Mi-kyoung, on July 7, 2020, to ask for help regarding filing a complaint against Park. The relief center provides legal advice and counseling on sexual harassment and assault cases, and promises anonymity to callers. Kim told Lee that he had a #MeToo case involving Mayor Park but did not disclose any information about her client, according to the prosecution.


Lee spoke of the matter with a head of another civic group, the KWAU, that evening, who called the co-head of the group, Kim Young-soon, the next morning on July 8, according to the prosecution.

Kim, who had personal relations with DP Rep. Nam In-soon, called up Nam within 15 minutes of the call. And almost immediately, Nam called Lim Soon-young, at the time the gender equality special adviser of the Seoul Metropolitan Government, according to the prosecution.

Lim had a one-on-one meeting with Park later that day at 3:00 p.m. and asked if Park had cause to worry about “unpleasant rumors about him,” according to the prosecution.

"That seems to be the first time Park heard of someone trying to report him for sexual harassment," the prosecutors' office said in its statement. "So it can be deduced that Park was informed [...] before the complaint was officially lodged at 4:30 p.m. on July 8."

Park dismissed the rumors initially in his conversation with Lim on July 8, but he called Lim and other aides to his home later that night, and told them that he had exchanged text messages with the former secretary before April 2020, which could be problematic if she decided to take issue with them.

Whether Park knew before his death that the complaint had been filed remains unclear, prosecution said.

Despite these findings, the prosecution said they didn’t have the legal grounds to charge the members of the civic groups, Lim and Rep. Nam with leaking information.

According to Article 127 of the Criminal Act, a public official or former public official who divulges official secrets obtained in the course of performing their duties can be punished with imprisonment of less than two years or suspended from their position for less than five years.

The prosecution said that they also found no traces of police officers or Blue House officials divulging information about the sexual harassment complaint to Park. The police informed the Blue House of the complaint by the evening of July 8, as per bureaucratic practice on complaints involving heads of local governments.

The former secretary said in a statement earlier in the week that the people involved in tipping Park off had “robbed [her] of the possibility to request and receive an apology from [Park].”

“It’s appalling that a defendant can hear of a complaint to be lodged against them even before it is filed,” she wrote in the statement released by lawyer Kim. “If the information had not been leaked, I could have, through legal means, received an apology [from Park] and even have forgiven him.”

What hurts the most, according to relatives of the former secretary, is the silence from those who had been involved in informing Park.


“She asks me several times a day, if people would finally believe her if she, too, commits suicide,” wrote the former secretary’s mother in another statement released by lawyer Kim earlier this week. “They don’t know what it’s like [...] The perpetrators and the high-ranking officials in the city government are still covering up the truth, and trying to erase the traces [...] when they should be the ones to protect the victim.”

After the prosecution announced their conclusions on Dec. 30, Rep. Nam issued a statement on Jan. 5, admitting that she did call Lim on July 8, but said that it wasn’t to leak information about the complaint.

“I feel the pain of the victim and I hope that her life returns to normal,” Nam said in the statement.

After the prosecution's announcement on Dec. 30, KWAU removed Kim from her post. Lim tendered in her resignation in July but it was dismissed by the city government. She completed her term in office on Jan. 14.

More recently, a civic group filed a request with the prosecution to investigate Kim and Rep. Nam on a possible charge of defamation.

A person can be charged for defamation if he or she knowingly or intentionally shares false information or facts that can undermine the credibility of a person’s claim or their standing in society.