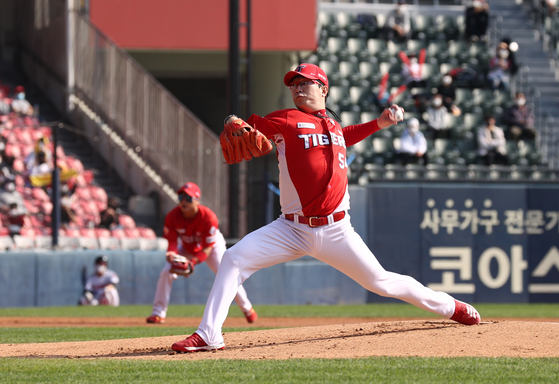 
Korean free agent pitcher Yang Hyeon-jong wants to give himself a bit more time as he tries to make it to the big leagues, according to his agent Wednesday.

The day was the self-imposed deadline for the left-hander to decide on his destination for the 2021 season, be it the KBO or MLB. Yang, 32, had been in talks with the Kia Tigers, the only KBO club he's played for in his 15-year career, for a return in case his major league dream didn't come true. The two sides met last Thursday and again on Tuesday.

But around noon Wednesday, Yang's agent, Choi In-gook, asked the Tigers for 10 extra days, and the club agreed to give Yang more time.
The club's general manager, Cho Kye-hyeon, said he wanted to support Yang's pursuit of his dreams.

"I was a player myself, and I understand that dream of reaching the major leagues as well as anyone," Cho said. "We agreed to wait for 10 more days, out of respect for Yang as our ace."

Choi thanked the Tigers for their patience. He also said Yang will be willing to join a major league club as long as he's included in a 40-man roster.

Yang has generated virtually no buzz in the slowly-developing offseason. Other big-ticket free agent pitchers, including the reigning National League Cy Young Award winner Trevor Bauer, haven't come off the board.

His ERA sat at 5.88 at the end of July, and the southpaw had to put up a 3.72 ERA across his final 16 starts just to bring the season number down to a more respectable level.

Yang was posted by the Tigers after the 2014 season but couldn't land a major deal then, either. A mysterious club won the bidding for the exclusive rights to negotiate with Yang, but the Tigers weren't satisfied with the amount of the winning bid and pulled Yang back from the market.

It was only in 2017 that Yang was voted the regular season MVP here, thanks to a 20-6 record and a 3.44 ERA. He earned the Korean Series MVP award in 2017 by leading the Tigers to their first championship in eight years. Yang pitched a complete game shutout and saved the clinching game in that series.