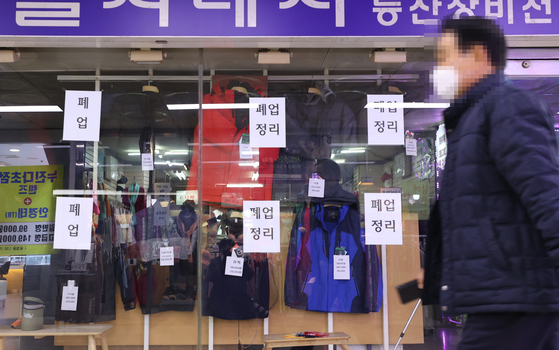 Going-out-of-business signs are displayed in the window of a store at the Euljiro underground shopping center in central Seoul. According to research by the Korea Federation of Micro Enterprise, more than eight out of 10 merchants suffered decline in sales due to the coronavirus pandemic. [YONHAP]


Major tech firms have started to competitively loan money to small business owners who used to be in a conventional finance blind spot.

Naver is taking the lead in broadening the scope for loans to include small business owners. In January, Naver Financial decided to ease the eligibility requirements for loans for small- and medium-sized enterprises (SMEs) from monthly sales of 1 million won ($900) for three consecutive months to 500,000 won. Once the requirements are met, they can take out loans of up to 50 million won at an annual interest rate between 3.2 and 9.9 percent without collateral.

Naver Financial in December introduced a loan service in partnership with Mirae Asset Capital. Previously, business owners with monthly sales of over 1 million won for three months in a row were eligible. The accumulated data helped with Naver’s decision to lower the eligibility requirement within a month since the program’s start.

“There was not a single incident of delayed payment among debtors,” said Kim Tae-kyung, head of the loans team at Naver Financial. “Due to the relaxation of eligibility standards, the eligible population for loans went up by 40 percent, and we are planning to continue to lower the standards.”

Naver Financial could ease the eligibility requirements for loan application in terms of sales because the evaluation assesses a variety of non-financial aspects on top of the financial records. Some of the variables include revenue stream, the number of regular customers, customer reviews and speed of customer reception.

The new program utilizes what’s called an alternative credit scoring system (ACSS) to lend money to small companies that are underqualified to borrow money from traditional banks due to a lack of credit history and an offline presence.

Online business owners have a hard time taking out loans from banks because they do not own any property to be held as collateral, and records are lacking. 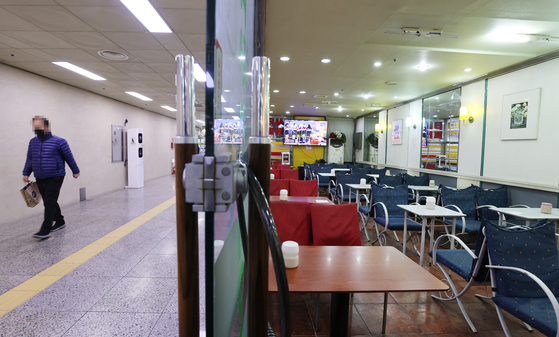 An empty restaurant in the Euljiro underground shopping center in central Seoul. [YONHAP]


“For office workers, substantial financial history stacks up over just half a year, but that may not be the case for many business owners,” said Kim. “Naver has all kinds of data for stores registered on its shopping platform Smart Store, so we can get rid of some blind spots.”

The higher rate loans Naver is offering to businesses lacking a credit history is an area that other big IT firms and fintech firms are drooling over. Kakao Pay is currently preparing to offer a product with higher rate loans based on its own credit evaluation model. Toss Bank, which is preparing to start, is currently planning to roll out a financial service dedicated to SMEs and merchants, in partnership with the Korea Federation of SMEs.

“Owners of small online businesses with a short history and without physical stores were in a blind spot where it is difficult to take out loans from banks and financial institutions,” said Suh Byung-ho, a senior research fellow at the Korea Institute of Finance (KIF). “Among big tech and fintech companies, only those that have compiled data from electronic transactions can give this field a shot.”

The fintech businesses are also targeting thin filers, or those with little or no financial history, and hence unable to take out loans from banks.

“Since the coronavirus pandemic began, there have been more cases where people start businesses on Naver’s Smart Store as their side jobs,” said Kim. “The proportion of thin filers [in the customer base] is rising, since more younger people and married couples are opening their businesses on the Smart Store.”

According to Naver Financial, the company’s approval rate of loans for thin filers was 52 percent. The average amount of loans was 25 million won, and the annual interest rate around 5.5 percent.

Kakao Pay's Pavlovian account will mine your data for you