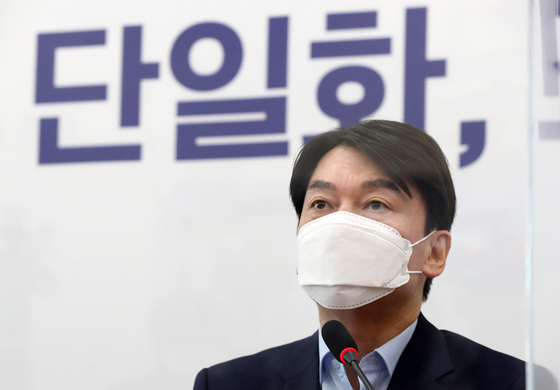 People's Party Chairman Ahn Cheol-soo speaks during a press conference on Tuesday at the National Assembly. Ahn demanded that the main opposition People Power Party open up its primary to all opposition contenders. [YONHAP]

“I don’t think it will be too late to consolidate the candidacy with Ahn after our party selects a candidate,” Kim Chong-in, acting head of the PPP, said Friday, making clear that he will negotiate a candidacy merger with Ahn after the PPP’s primary for the Seoul mayoral by-election.

Ahn, chairman of his own People’s Party, proposed Tuesday that the PPP open up its primary to all opposition contenders including independent politicians. Ahn said he wants to maintain his People’s Party membership but run in the PPP primary.

Ahn cited the Democratic Party in the United States, which allowed Vermont Independent Sen. Bernie Sanders to run in its presidential primary without joining the party.

In his interview with MBC’s evening news program on Thursday, Kim said he agrees with the idea that the PPP must ultimately negotiate with Ahn to field a unified candidate.

“I told Ahn that there are only two ways to consolidate candidacies,” Kim said. “One is that he joins our party and runs in our primary. The other is asking the people in early March, after our party’s candidate is selected, to decide which one is more suitable.” 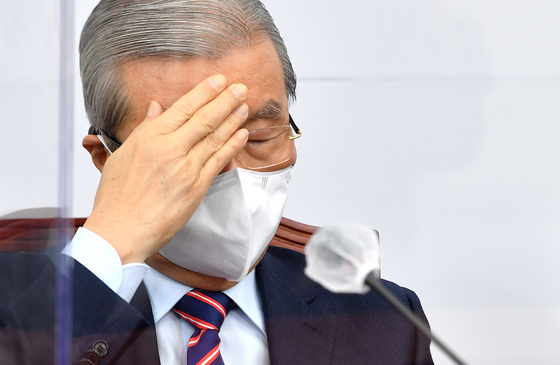 People Power Party's acting chairman Kim Chong-in is deep in thought during a party leadership meeting at the National Assembly on Thursday. [YONHAP]

Kim said the PPP is the largest opposition party that is also preparing for the next year’s presidential election, so it cannot unconditionally accommodate Ahn’s demands.

Kim also issued a warning to Ahn that once the two sides consolidate candidacies, he must accept the outcome, stressing that the voters will not support a candidate who disrespects the merger outcome.

Preventing a split in conservative votes, which have cost them elections in the past, is crucial for the opposition. In the 2017 presidential election, multiple conservative candidates ran against Moon Jae-in of the Democratic Party (DP). Moon was elected with 41.08 percent of the votes, but the conservative votes were split between Hong Joo-pyo of the Liberty Korea Party, the predecessor of today’s PPP, and Ahn. Hong took 24.03 percent and Ahn 21.41 percent. Together, the two conservative candidates scored 45.44 percent, possibly enough to win against Moon if only one of them ran.

The PPP’s deadline to apply for the by-election primary was Thursday. According to the PPP, 14 politicians, including former Rep. Na Kyung-won and former Seoul Mayor Oh Se-hoon, registered to run for the nomination for the Seoul mayoral race. For the Busan mayoral by-election, nine politicians registered their candidacies.

The PPP will start the vetting process on Friday, scrutinizing the applicant backgrounds. The party will interview the candidates for the Seoul mayoral race on Sunday and for the Busan race on Monday. A preliminary selection of four candidates to run in the primary will be announced next week. The main primary schedule has yet to be decided. The PPP will select one of the four primary candidates solely based on a public opinion poll.

The ruling DP's primary for the Seoul mayoral race is looking sedate compared to the situation at the opposition PPP, where major politicians are running.

Within the DP, the race for Seoul mayor is expected to be between Park Young-sun, a former cabinet minister, and Rep. Woo Sang-ho, a four-term lawmaker and former floor leader. 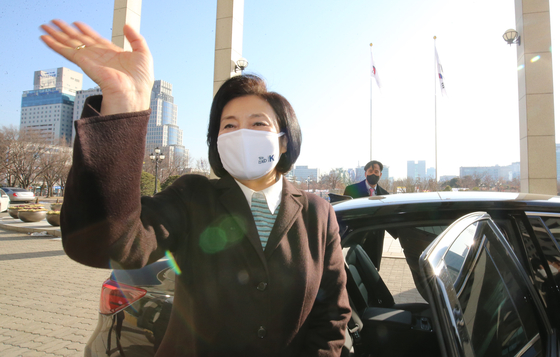 Minister Park Young-sun leaves the Ministry of SMEs and Startups Wednesday afternoon after a farewell ceremony. She stepped down from the post to run in the ruling party's primary for the Seoul mayoral by-election. [NEWS1]

Park stepped down as minister of SMEs and startups Wednesday morning. President Moon Jae-in nominated her successor, DP Rep. Kwon Chil-seung, who needs to go through a confirmation hearing for appointment. But Park is free to run in a party primary. The primary schedule has yet to be decided.

Woo announced his intention to run in the April by-election on Dec. 13.

On Wednesday, Rep. Park Ju-min of the DP announced he wouldn’t run. Former Finance Minister Kim Dong-yeon also denied rumors that he would run earlier this month, saying he had no such intention.

After Park’s farewell ceremony at the SMEs and Startups Ministry, reporters asked her about her plan to run in the election, but she did not answer. Sources close to Park said she will formally announce her bid next week. If Park runs, it will be her third attempt to become Seoul mayor. She also ran in the primary in 2011.

Park and Woo have been this way before. In 2018, they both ran in the DP primary for the Seoul mayoral race, but were defeated by Mayor Park Won-soon, who was seeking a third term, which he won. Park committed suicide last July following an allegation that he sexually molested his former secretary.

Woo has already started his campaign and announced his pledges. Although he has many supporters among former student activists from the 1980s, his relatively low public profile is seen as a weakness.

Park Young-sun, who is leading in various polls, was a reporter and news anchor for MBC from 1982 to 2004, when she joined the Uri Party, predecessor of the DP, as a spokeswoman. She won her first lawmaker seat in 2004 and was re-elected three times.

During her 16 years in the National Assembly, she challenged corrupt business practices and the dynastic control of Korea's big business groups. She served as Moon’s minister of SMEs and Startups from April 2019 until last Wednesday.

The DP said it is accepting applications from primary contenders through Friday.

So far, Ahn of the People’s Party is a clear frontrunner in the mayoral race. According to an Ipsos Korea poll announced on Jan. 3, Ahn scored 24.1 percent, while former Minister Park of the DP scored 15.3 percent. Oh of the PPP followed with 9.5 percent and PPP’s Na with 6.3 percent.

In another poll announced by WinGKorea Consulting on Jan. 5, Ahn was projected to beat Park if he is the sole conservative candidate. In a two-way race, Ahn would score 47.4 percent and Park 37 percent.