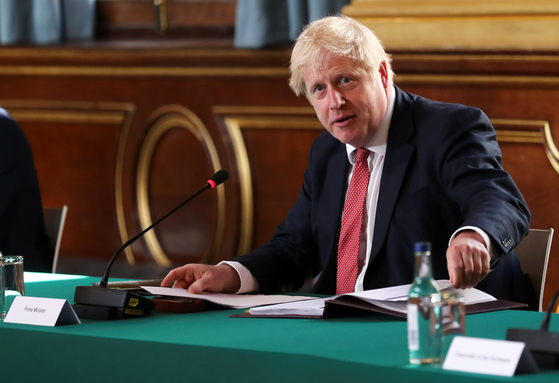 
Blue House spokesman Kang Min-seok said in a briefing that Johnson, via a letter, confirmed Britain’s participation in the summit set to be hosted by the Korean government in Seoul this May.

Also known as the Partnering for Green Growth and the Global Goals 2030, the P4G summit is a public-private initiative to fight climate change and to deliver on the Paris Climate Agreement and the Sustainable Development Goals (SDGs).

The Korean government is hoping to host this year’s event with in-person participation, which officials say will largely hinge on the Covid-19 pandemic and whether it is under control.

In the letter, Johnson also invited Seoul to the Group of Seven, or G7, summit in Britain, Kang said, adding that President Moon Jae-in was expected to reply.

Kang did not say whether Moon was going to confirm his participation in the G7 summit, but a Blue House official who later spoke on the condition of anonymity said it was “safe” for reporters to think he will.

Johnson’s letter comes days after his office announced Britain would invite Korea, Australia and India as guest countries to the three-day G7 summit scheduled to kick off on June 11 in Carbis Bay in Cornwall, Britain.

Kang quoted the British prime minister as saying in his letter that the world has to double down on eradicating the coronavirus this year, supporting free trade and responding to climate change while reaching net zero carbon emissions. To this end, it is crucial for Seoul’s voice to be reflected in relevant discussions, Johnson was quoted as saying.

In Moon’s letter to Johnson, Kang said the Korean president was planning to mention he will work towards the success of the G7 based on his own experiences announcing the Korean New Deal and net zero plan.