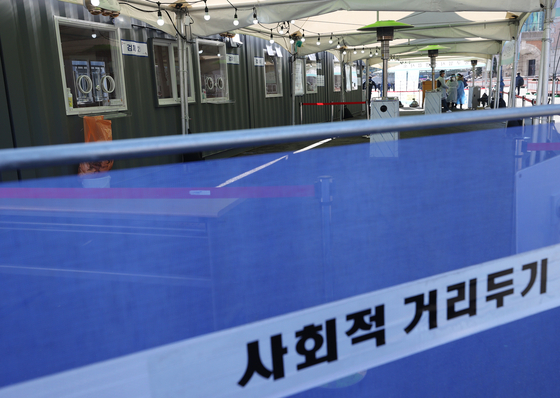 A testing center near Seoul Station sits relatively empty on Sunday, amid a continuous drop in cases throughout the country. A total of 392 infections were reported from the night before. [YONHAP]


Though British drug maker AstraZeneca has cut back Covid-19 vaccine deliveries across Europe, health authorities in Korea assure the country will have no issues receiving doses from the company within the first quarter of the year.

The Korea Disease Control and Prevention Agency (KDCA) on Sunday said there were "no changes" being made to the plan to receive around 10 million doses of Covid-19 vaccines from AstraZeneca to be locally produced by SK Bioscience.

The remark comes amid a statement from AstraZeneca that its production of Covid-19 vaccines destined for Europe was "lower than anticipated," raising anxiety in a continent currently facing the brunt of a massive third wave of the virus. U.S. pharma giant Pfizer also said earlier its delivery of vaccines in Europe would be delayed.

With the setback complicating European countries' immunization schedules, the two companies have been facing criticism from health officials across the continent, while concerns have been mounting on whether they will be able to fulfill their contract obligations with other countries as well.

SK Bioscience also obtained a licensing deal with U.S. pharma giant Novavax to produce 20 million doses of Covid-19 vaccines. The company is also conducting testing for its own vaccine that is under development.

Sporadic infections continue to sprout across the country amid a steady but continuous downward trend in new coronavirus cases, which dropped below 400 to 392 on Saturday, according to the KDCA. 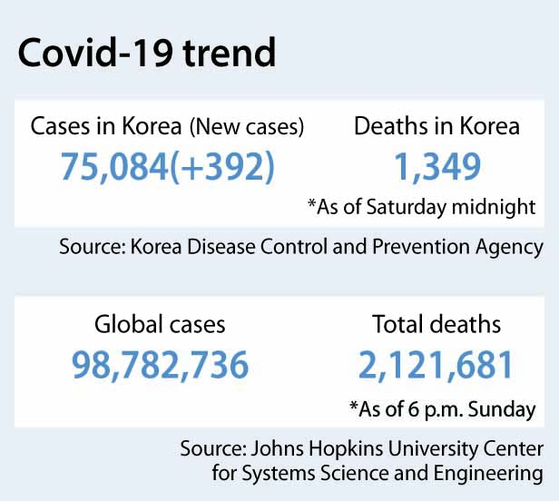 Of the total, 369 were locally transmitted, while 23 came from abroad, authorities said. A total of 12 new fatalities were reported, putting the total death toll at 1,349.

With the continuing decrease in cases, Busan led the country in scaling back its social distancing guidelines from Level 2.5 to 2 starting today, city authorities said Sunday.

Busan officials said while small clusters still exist in the city, the rate of infections was being "securely maintained." The economic pressures faced by small-business owners were particularly considered in reaching the decision, they added.

Greater Seoul remains under Level 2.5 restrictions, after authorities extended measures for two more weeks until Jan. 31. Regulations have been eased somewhat for businesses like cafes and gyms amid fierce complaints from business owners.

In a central disaster headquarters meeting Sunday, Prime Minister Chung noted the continuing drop in cases was optimistic, but urged preparedness in case a more infectious variant of the virus from Britain spreads around Korea.

Chung also noted authorities had discovered the first case in the country where a domesticated pet had contracted Covid-19.

Without specifying what kind of animal had been infected, Chung urged health officials to scientifically assess the likelihood of inter-species transmission between humans and animals and create guidelines for pet owners.