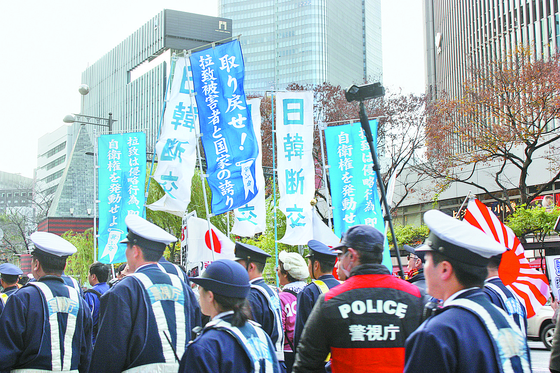 A “Hate Korea” demonstration in downtown Tokyo in 2018. [AP/YONHAP]


When I write as a Tokyo correspondent, my articles often get comments, “Why does this reporter always write about Japan?” or “Lee is busy reporting about her own country.” Then, should I write about Joe Biden’s inauguration when I am in Tokyo? On Covid-19 news, some comments even say, “Get coronavirus there and die,” and on natural disasters, they say, “Japan should sink.”

When I read these comments, I say to myself that life and death are in the hands of the heavens, but I get a little depressed. I came to Japan at this time and get criticized, and I think correspondents like me are one of the victims of the intensifying Korea-Japan discord.

Then, I was surprised when I attended a New Year’s gathering of Mindan, or the Republic of Korea Residents Union in Japan, last week. Attendees seemed troubled. It was shortly after a Korean court upheld the Japanese government’s accountability to compensate the wartime sex slavery victims by Japanese military. The attendees projected that Korea-Japan relations would worsen. When a New Year’s address should be full of hope, the head of Mindan took the podium and repeatedly said he could not stand the anxiety. He added, “Korea-Japan relations are a matter of life and death for one million Korean residents in Japan.

As “anti-Korean” has become a business in Japan, living as a Korean resident seems to be an extreme challenge. They have to face anti-Korea protests frequently and bookstores openly display books titled “Koreans are Liars” or “I am fortunate not to be born a Korean.” They have to live in Japan anyway, so it must be emotionally tiring to calmly pass over these incidents.

Threats of various degrees exist, from radical rightists throwing stones at the Mindan office to passersby who intentionally hit the shoulder of someone just because they were reading a Korean website. A resident I met at the Mindan gathering said, “When there are news reports that the Korea-Japan relationship is bad, I get worried about the kids first. They may be harassed or discouraged.”

Of course, those who hate are bad, and hate should be prevented with laws and a system. But I want to remind Korean leaders that when they unnecessarily encourage confrontation of Tokyo with offensive language and return the same hate to Japan, the ones who get hurt are the minority group in Japan. I am writing this so that I don’t forget there are people who actually suffer in Japan after the countries’ relations turn bad.