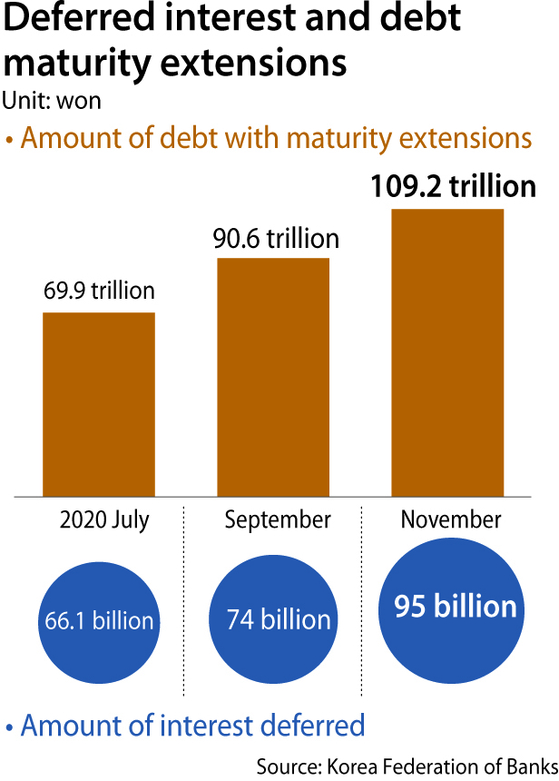 The profit-sharing scheme proposed by the ruling party is gaining momentum, with politicians targeting banks with aggressive policy suggestions.

According to the Democratic Party (DP), financial and IT companies have benefited disproportionately from the pandemic and should be compelled to part with some of their profits for distribution to those that suffered during the crisis.

The profit-sharing system for the finance sector gained traction after Rep. Hong Ik-pyo, the DP’s head of policy, said on Jan. 19 that the finance sector has been most profitable during the pandemic, since banks regularly collect interest.

“The interest payments to banks should be stopped or limited,” Hong said during a radio program on KBS last Tuesday.

The DP identified e-commerce companies and food delivery app companies as subjects of the profit-sharing policy. The financial holding companies became targets for the politicians as they look set to report historically high profits.

Major financial companies fared well last year. In a recent report, Korea Investment & Securities estimated that the yearly net income of the core financial holding companies for 2020 would be 15 trillion won, up 7 percent from 2019. The demand for loans as a result of economic hardships during the pandemic contributed to the rise. In response to the domestic stock market craze, the profits from interest charged by securities firms, which are subsidiaries of the financial holding companies, also rose.

This has been used to justify profit-sharing, especially as 80 percent of bank loans support small-business owners and lower-income applicants. Banks say the government has been intensifying its intervention into the private sector for political reasons.

Banks have contributed to the government-led efforts to defer repayment. At the end of November, the deferred interest of banks stood at around 95 billion won, and the total principal of the debtors, who have the benefit from the forbearance, is estimated to be 3.8 trillion won.

“Bank funds ultimately come from shareholders and account holders, but is it right for the ruling party to use the funds haphazardly?” said a spokesperson for a local bank.

“If politicians demand things like interest rate exemption, postponement in loan repayments and a reduction in margins of deposits and loans based on the political philosophy at any given time, then the integrity of banks is bound to be harmed,” said Lee Min-hwan, professor of global finance and banking at Inha University.