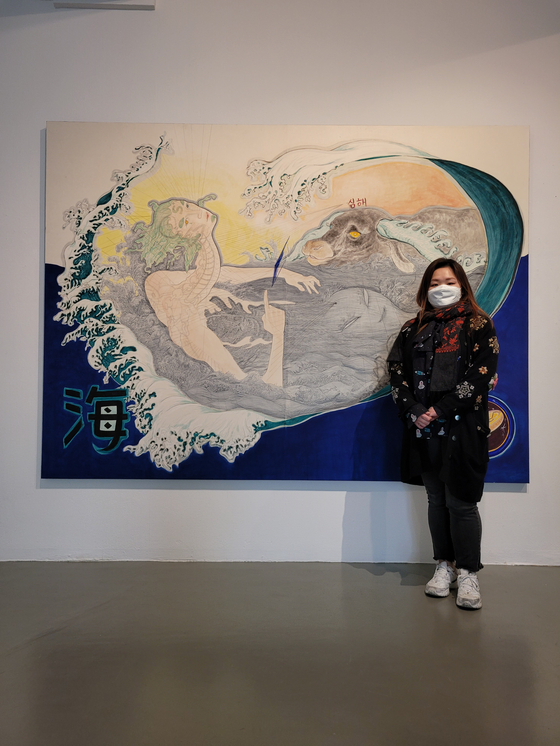 Artist Tae Kim poses with her painting ″Black Cow,″ which is part of the ″On-Tact″ exhibition at K.O.N.G Gallery in central Seoul. [MOON SO-YOUNG]

‘Ontact,’ as well as ‘untact’ are newly-coined words that have been frequently used by the Korean media since the outbreak of the pandemic. ‘Ontact,’ a combination of the words ‘online’ and ‘contact,’ means online contact, while ‘untact’ means contact-free. Paradoxically, the show features the most traditional genre of art that requires offline, manual labor — paintings.

Among the two participating artists, Tae Kim, 35, presents large-scale paintings in her “Black Cow” series, each of which depicts a human whose body is partly transformed, dismantled or fused with the virtual world of the Internet. “Black cow” is a translation of heuk-u, Korean slang that refers to a pushover, in particular, those who squander money on online game items or cryptocurrencies.

“This is not a certain person but contemporary humans including myself,” said the artist, who is a digital native and big fan of the League of Legends game. “We, immersed in the virtual space, neglect our physical, bodily existence in reality. At the same time, we expose our intimate, private life in the virtual space, which I feel like is exposing our internal organs. My paintings are about these ideas.”

Kim creates her paintings with traditional East Asian pigment and techniques. She obtained a bachelor’s and master’s degree in East Asian painting at Seoul National University. “Breathing control is very important when you make brush strokes in East Asian paintings [as they are difficult to correct by painting over unlike Western oil paintings],” she said. “So, painting, above all, makes me feel and think about my bodily existence and its relation with the virtual world.”

She also presents her “Faceless Gamers” series, which are portraits of other players she interacts with whose faces she has never seen but imagines based on online conversations they have. 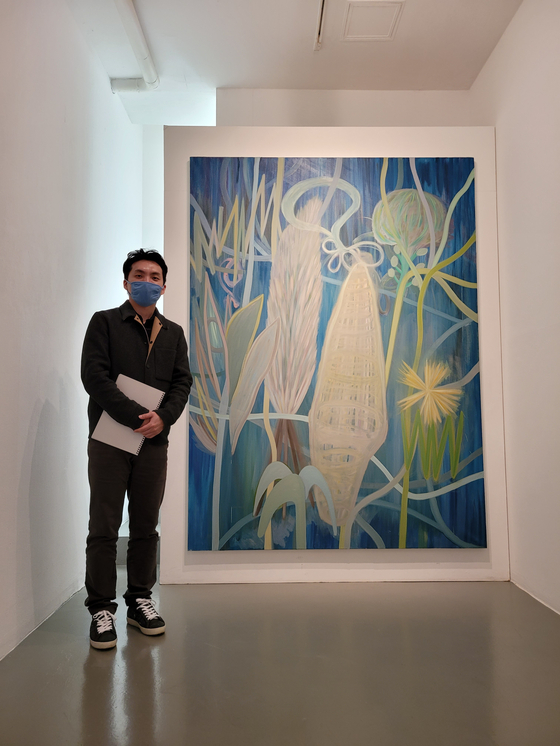 Artist Park Jin-hee poses with his painting ″Marsh Garden″ which is part of the ″On-Tact″ show at K.O.N.G Gallery in central Seoul. [MOON SO-YOUNG]


The other artist participating in the exhibition, Park Jin-hee, 37, presents large-scale oil paintings of elegant colors, which seem to be in between abstract and figurative art. Actually, they depict the plants and microorganisms of marshes.

“Although I was born and have lived in cities, I came to take interest in marshes when I was studying in Britain,” Park said. He obtained a master’s degree in painting at the Royal College of Art in London. “They are places full of danger and vitality at the same time. I began to paint in oil what was happening among microorganisms in marshes — their dynamics and vital forces. Oil painting is in between solid and liquid and that characteristic is similar to that of marshes.”

Park added it’s time to focus on nature, such as those found in marshes, amid the coronavirus pandemic, which he thinks is related to the over-development of capitalism and industries.

The exhibition runs through Feb. 21.