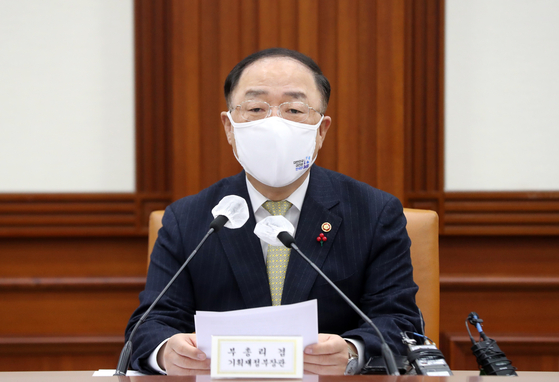 Finance Minister Hong Nam-ki speaks at a meeting to discuss measures for economic recovery from the Covid-19 pandemic at the government complex in central Seoul last Thursday. [YONHAP]

Legislation to provide state compensation to small business hurt by the Covid-19 pandemic is being pursued by the ruling Democratic Party (DP), a plan which initially received a negative response from the Finance Ministry.


The DP aims to pass the compensation bill for small businesses in the National Assembly in February and roll out payments “within March or early April at the latest,” Hong Ihk-pyo, a three-term lawmaker who serves as chief of the DP’s policy committee, said in an MBC Radio interview Monday.

Rep. Hong took part in a meeting of senior party, government and Blue House officials the previous day to discuss Covid-19 relief legislation to subsidize mom-and-pop stores and other self-employed businesses that have incurred great losses amid the pandemic.

Finance Minister Hong Nam-ki, who doubles as deputy prime minister for economic affairs, was notably missing from this meeting, though he was said to have skipped it with advance notice because he had been “feeling unwell” for the past two days, according to Rep. Hong.

The DP is planning three legislations related to Covid-19 relief — a damage compensation bill for small businesses, an act on corporate profit-sharing and a social solidarity fund bill.

The compensation bill is expected to enable state payouts to small-business owners and self-employed workers that have suffered damages due to government-imposed restrictions and shutdowns amid stricter social distancing regulations.

The corporate profit-sharing act is expected to offer administrative, financial and tax benefits to large corporations in return for voluntary profit-sharing with smaller subcontractors.

The bill for a social solidarity fund aims to support small businesses through a fund comprised of voluntary donations from corporations and the public.

The legislation is expected to go beyond the previous emergency relief payments that have been considered insufficient to cover the financial damages from the pandemic restrictions, including the cost of rent and employee wages.

DP Chairman Lee Nak-yon, in the party’s Supreme Council meeting Monday, noted bipartisan interest in the plan to enable compensation for small-business owners, saying, “I hope the related legislation can be discussed in the National Assembly in February.”

However, such state compensation is expected to put an additional fiscal burden on the Ministry of Economy and Finance, which initially shunned Prime Minister Chung Sye-kyun's idea of providing state compensation for small-business owners last week.

“It is difficult to find any country that has legislated” state compensation for small private businesses, said Vice Finance Minister Kim Yong-beom in a meeting of the Central Disaster and Safety Countermeasures Headquarters last Wednesday.

Chung shot back in response, saying, “Is this country the Finance Ministry’s country?”

Chung instructed the Finance Ministry Thursday to work out measures to help those hit hard by the coronavirus pandemic.

Finance Minister Hong, despite seeming skeptical of Chung's legislation initiative at first, appears to have changed his tune to accommodate the prime minister’s proposal.

In a Facebook post Friday, Minister Hong said that the ministry will thoroughly review calls for legislation to compensate small-business owners, while also voicing his apprehensions due to fiscal limitations.

“The Finance Ministry also believes that a response in any form is needed and is conducting an internal review,” wrote Hong, noting that much more study is needed because the plan for state compensation is a “road that has not been taken.”

He pointed out that one lawmaker’s draft bill reportedly required a budget of 24 trillion won ($21.8 billion) per month, amounting to around 100 trillion won after four months, or half of the country’s total annual welfare budget.

The Gyeonggi Provincial Government last week announced it will be paying 100,000 won in Covid-19 relief to all its residents.

The timeline raised by Rep. Hong Monday has resulted in criticism from lawmakers of the main opposition People Power Party for attempting to sway public opinion ahead of the Seoul and Busan mayoral by-elections in April.

Small-businesses owners have been calling on the state for compensation for the damages incurred as the government maintains the second-highest Level 2.5 social distancing measures for the greater Seoul area and Level 2 for the rest of the country.

Earlier this month, a group of over 300 cafe owners filed a lawsuit against the government seeking some 1.8 billion won in damages. Operators of fitness centers have also launched a similar suit.