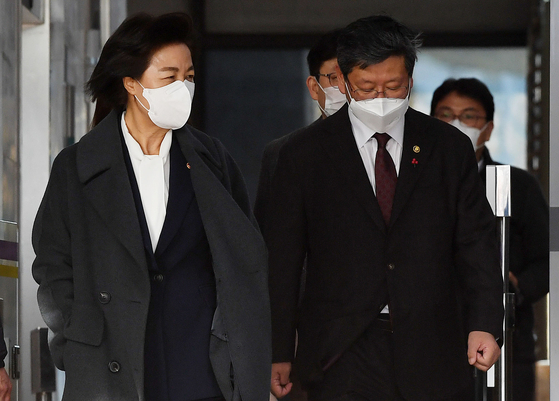 Vice Justice Minister Lee Yong-gu, right, who is in hot water over allegations of assault against a taxi driver, accompanies outgoing Justice Minister Choo Mi-ae out of the ministry's headquarters in Gwacheon, Gyeonggi on Monday. [YONHAP]


The National Police Agency issued an apology Monday for misleading the public about the existence of footage capturing Vice Justice Minister Lee Yong-gu allegedly assaulting a taxi driver in November.

Lee, who was appointed the No. 2 figure at the Justice Ministry in December, has been in the hot seat after opposition politicians claimed police may have let him off the hook for the incident.

According to police, Lee took a taxi to his home in Seocho-dong in Seocho District, southern Seoul, on Nov. 6. He fell asleep in the car, and the driver woke him up when they reached the destination. Lee allegedly hurled insults at the driver and grabbed him by the collar.

But controversy flared up again after media reports surfaced there was in fact footage from the taxi, and that the taxi driver had shown the video in question to a police officer through his mobile phone in a police investigation on Nov. 11.

The taxi driver claimed the officer watched the approximately 30-second-long video, then said he was going to “pretend [he] never saw” the footage.

Allegations of a cover-up prompted the Seoul Metropolitan Police Agency to reopen the case on Saturday and suspend the officer in question until further notice.

Choi said police initially had difficulty verifying what had happened as the officer had not reported having watched the footage.

Further questioning would prove whether he had simply missed putting the record on file or whether there was intention behind his actions, the latter of which could warrant a criminal investigation, Choi added.

Prosecutors have launched their own probe into the matter after a complaint was filed against Lee by a civic group. They have already obtained restored footage of the incident taken from the taxi’s dashboard.

While there is no clear evidence yet to prove any organized cover-up of the incident beyond a single officer, the case brings the police’s credibility under scrutiny at a time when its powers have been vastly expanded as a result of the government’s rebalancing of law enforcement authorities.

Under the Moon Jae-in administration’s reform plans, police will now be able to close criminal cases on their own, independent of prosecutorial oversight.

Choi addressed those public concerns about police accountability, stressing the agency would “closely monitor” how it exercises its new powers and how it conducts investigations.

The changes also effectively split the police between its investigative and public safety arms, with the former headed by the NIH, which will function in ways similar to the U.S. Federal Bureau of Investigation.