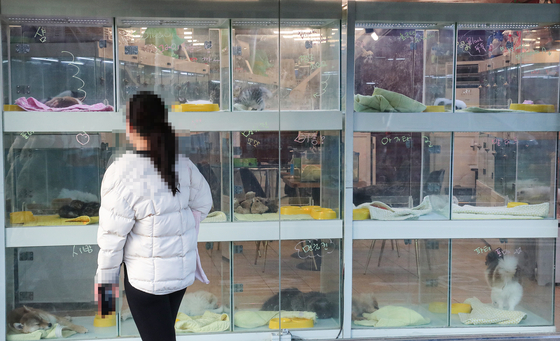 A passerby looks at cats and dogs at a pet shop in downtown Seoul Sunday. [YONHAP]

Anxiety is running high among pet owners in Korea after health authorities reported the country's first case of the coronavirus in an animal — a cat — which apparently got infected by its owners.

Health officials, however, ruled out the possibility of the virus jumping from pets to humans — at least for now — stressing there hasn’t been a single case of a pet infecting a person reported across the world.

As of late last November, 456 Covid-19 infections have been found in six different species of animals in 19 countries not including Korea, the Korea Disease Control and Prevention Agency (KDCA) said. The animals were cats, dogs, lions, tigers, a puma and minks. The countries included the United States, Japan, Britain and South Africa, among others.

The KDCA said health authorities in each country concluded the coronavirus was transmitted by humans. Infected animals showed symptoms similar to humans such as a cough, runny nose, diarrhea and breathing problems, while some other animals showed no symptoms at all, just like asymptomatic humans.

In a Sunday meeting with top health officials, Prime Minister Chung Sye-kyun ordered government authorities to “scientifically assess” whether the coronavirus can spread between humans and animals, and reveal the findings to the public. The Ministry of Agriculture, Food and Rural Affairs was specifically told to devise guidelines for pet owners to follow.

As officials were trying to look for a new home for the cat while the mother and daughter were receiving treatment, they noticed the cat’s feces was abnormally watery. They ran a virus test on the feline and the results tuned out positive last Thursday, health officials told local media Sunday.

The cat has been in isolation ever since.

The same day officials broke news about the cat, Cho Je-yoel, a veterinary professor at Seoul National University who’s developing a coronavirus test kit for pets, told reporters he thinks he found a Covid-19 infection in a five-year-old French bulldog as well, whose owner tested positive for the virus on Jan. 17.

Whether the French bulldog has been infected with the virus for sure is currently being investigated by the Ministry of Agriculture, Food and Rural Affairs, Cho said, adding that the dog’s test results are expected to be revealed soon.

The dog was said to be asymptomatic and isolated.