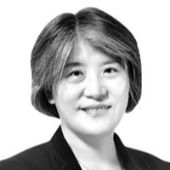 The author is an editorial writer of JoongAng Ilbo.


It was a rare sight and release — the presidential office photo and press statement on the South Korean president standing next to outgoing Japanese Ambassador Koji Tomita on Jan. 14. The opposition People Power Party (PPP) Rep. Cho Tae-yong, a former deputy national security adviser, noted that a Korean president rarely saw off an ambassador or released a photo and a press statement about it. The last time a president met an outgoing Japanese envoy was in March 1990, when President Roh Tae-woo briefly met the then ambassador to hand over a national award for contribution to bilateral ties before he headed back home.

The press video release showed President Moon Jae-in stressing how the two countries were “the closest neighbors and important partners for peace and prosperity in Northeast Asia and the world.” He called for a fast “normalization of constructive and future-oriented relationship.”

There must have been a clear design behind the Blue House move breaking the tradition for the first time in 30 years. Rep. Cho saw it as a sign of rapprochement toward Tokyo. In a New Year’s press conference on Jan. 18, President Moon expressed “bewilderment” at a Seoul court ruling that ordered the Japanese government to pay damages to former comfort women for their wartime sex slavery in spite of the international law of guaranteeing sovereign immunity. Moon also recognized the 2015 settlement on the comfort women issue as an “official agreement” between the conservative Park Geun-hye and Shinzo Abe governments, although his administration nullified it. 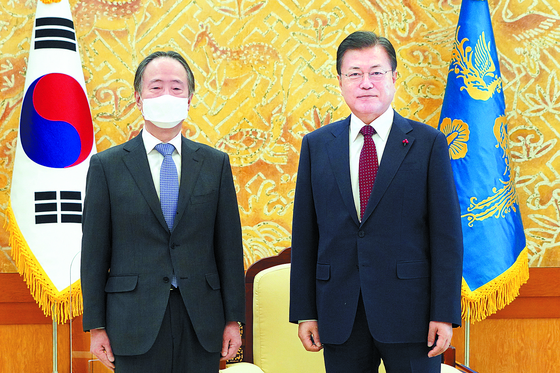 In a rare move last week, President Moon Jae-in invited outgoing Japanese Ambassador Koji Tomita to the Blue House to express appreciation for his role over the past 14 months and stressed the importance of the two nation’s partnership for the peace and prosperity of the world. [BLUE HOUSE]

Kim Chang-il, a seasoned politician from the ruling Democratic Party (DP) with close ties with Japanese politicians, was named the new ambassador to Japan as Deputy National Security Adviser Kim Hyun-chong, a hard-liner on Japan, was replaced.

The change has been dramatic. The Moon administration attacked the previous Park Geun-hye administration for expressing concerns about the Supreme Court’s ruling on wartime forced labor. The Moon administration also issued a “respect to the judiciary’s judgment” when the top court under liberal Chief Justice Kim Myeong-su appointed by Moon delivered a surprising ruling that ordered Japanese companies to compensate wartime Korean workers despite the 1965 basic treaty.

That’s not all. The Moon administration also threatened to walk away from the Korea-Japan General Security of Military Information Agreement (Gsomia). Moon even recalled legendary sea battle victories by admiral Yi Sun-sin against Japanese invaders in the 16th century, while his secretary of civil affairs honored Korean peasants who had fought against Japan in the 19th century. Moon’s opponents were called “pro-Japan forces.”

But his promise of a “practical solution” was never delivered. Yoon Mee-hyang, accused of exploiting victims of Japanese wartime sex slavery, has become a lawmaker for the ruling party and keeps her seat despite charges of embezzlement and abuse by a surviving victim.

Seoul has been acting no different from the Abe government, which suddenly changed its view and upheld the 1993 Kono Declaration which included a national apology and recognition of sexual slavery under Imperial Japan.

The Moon administration may have suddenly veered away from its hard-line policy to respect the new U.S. president, who values a traditional tripartite security alliance among South Korea, America and Japan, or to find a breakthrough in the deadlocked Korea-Japan relationship for a summit with North Korean leader Kim Jong-un during the Tokyo Summer Olympics. Whatever the motive, genuine actions must follow.

The Moon administration often resorted to innate public hostility toward Japan to justify its hard-line policy. It has a duty to explain why knee-jerk antagonism toward Japan is not the answer. It can be more successful if it can persuade die-hard critics, including the DP. The National Assembly dominated by the DP may be able to find a solution to go around the judiciary’s decisions.