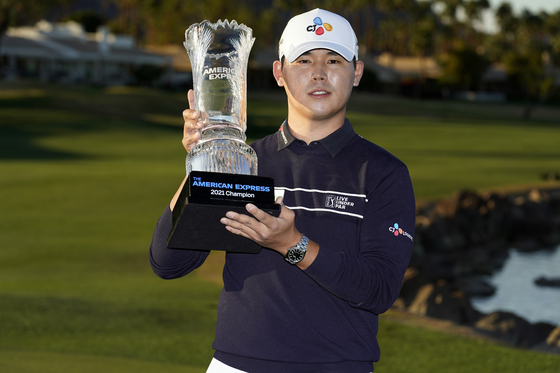 Kim Si-woo holds the winner's trophy at the end of The American Express tournament in La Quinta, California, on Sunday. [AP/YONHAP]

Kim won the PGA Tour's The American Express by a single point, finishing the tournament with birdies on two of the final three holes to finish at eight-under-par, 64, in the final round, one shot ahead of Patrick Cantlay of the United States.

Kim was playing six groups behind Cantlay, so he spent a good part of his final round watching the scoreboard as Cantley shot 11-under-par, 61, for the round and moved up to first place.


"I had to know what's going on, so I knew how to play my game in the final round," Kim was quoted as saying on ESPN. "I knew Cantlay played really well. I tried to keep patient and believe in myself. I got the chance on 16 and 17, and that's when I could make it. I feel good about myself."

Kim started the final round in a three-way tie with Tony Finau and Max Homa, who are both from the United States.

Finally, Kim's 18-foot birdie putt on the par-3 17th won him the tournament, even with Cantlay warming up in preparation for a possible playoff round. 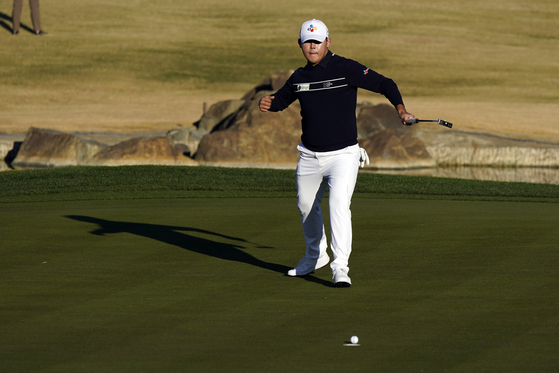 Kim Si-woo reacts after making a birdie putt on the 17th hole during the final round of The American Express tournament in La Quinta, California, on Sunday. [AP/YONHAP]

Kim shot three bogey-free rounds en route to securing the win, finishing with a tournament total of 265, one stroke ahead of Cantlay at 266.

Kim's victory at The American Express was his third PGA title, coming more than three years after he became the youngest person ever to win The Players Championship back in 2017. Kim then went more than 100 tournaments without picking up another win.

Kim's only other PGA title was at the Wyndham Championship in 2016.

"Every year, I've had a chance, but I couldn't make it," Kim said. "I had a lot of resolve in my mind last night. I took melatonin, but still I didn't sleep very well."

Kim, at 25 years old, is one of only two players on the PGA Tour under the age of 26 with three titles.

An Byeong-hun of Korea also made the top 10, finishing tied for eighth place with a total score at 14-under-par. This was An's best result since he finished third at the Wyndham Championship in 2019.

Korean golfer Im Sung-jae finished just outside of the top 10, coming in tied for 12th place with a total score of 13-under-par. Im has gone from strength-to-strength in recent tournaments, finishing tied for fifth at the Sentry Tournament of Champions two weeks ago and tied for second at the Masters Tournament in November last year.

The PGA Tour will return this weekend at the Farmers Insurance Open in San Diego.