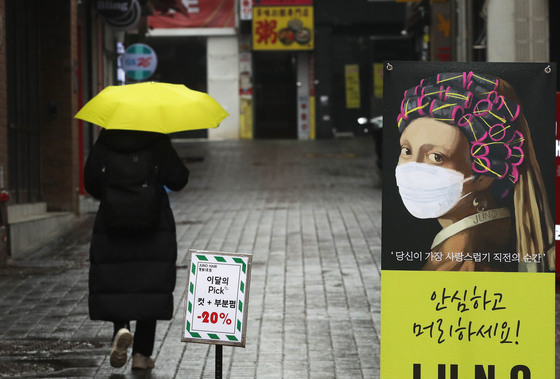 A person walks along an empty street in Myeong-dong in central Seoul on Tuesday. The coronavirus pandemic has greatly reduced household consumption, leading to a minus 1-percent growth in the country's real gross domestic product (GDP) last year, according to data by the Bank of Korea. [YONHAP]

According to data by the Bank of Korea on Tuesday, Korea's real gross domestic product (GDP) fell by 1 percent year-on-year last year.

It is the lowest growth rate in 22 years, after the foreign exchange crisis in 1998 when Korea posted minus 5.1 percent growth.

Last year marked the third time ever for the country to post minus growth. The first time was in 1980, affected by the second oil shock, and the second was in 1998.

Finance Minister Hong Nam-ki, however, said in a Facebook post Tuesday that "Korea managed to slip by only a little bit, proving the country's economy is strong against crisis," adding if Covid-19 cases had settled in the latter half of the year, a minus growth could have been prevented.

Hong added that other major developed nations are projected to post growth between minus three to 10 percent.

The government's role was big in reducing minus growth. The government's relief funds and expansionary fiscal policies throughout last year acted as a buffer for the local economy while private consumption largely contracted.

bank of korea gdp minus growth