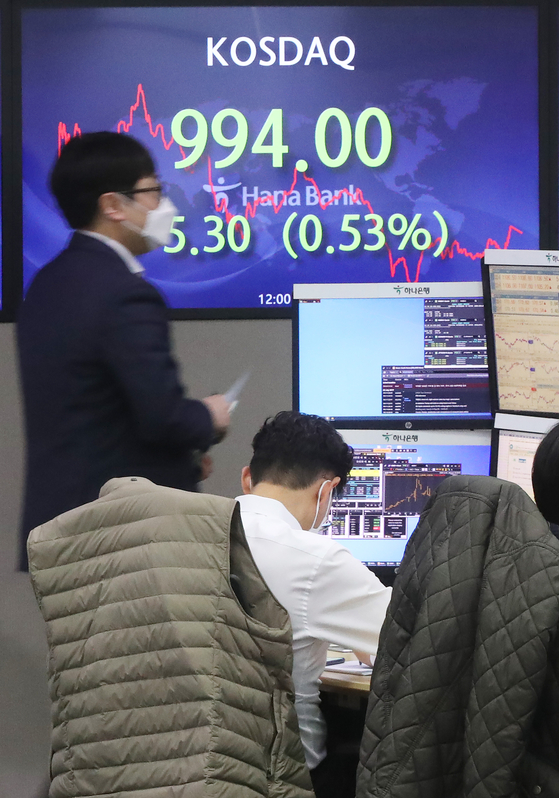 Korea's tech-heavy Kosdaq market closed at 994.00 on Tuesday, down 0.53 percent compared to the previous trading day against expectations it would close over 1,000. During intraday trading, the index reached as high as 1,007.52, but closed weaker due to heavy selling by foreign and institutional investors. [YONHAP]


Korea's tech-heavy Kosdaq index punched through 1,000 during trading on Tuesday.

The Kosdaq started off strong at 1,000, after closing at 999.30 on Monday, affected by the strong Nasdaq index the previous day. The index reached 1,007.52 during intraday trading.

With constant selling by foreign and institutional investors, the index ended weak despite heavy buying by retail investors.

By sector, broadcast and media as well as entertainment shares were weak, contracting by more than 2 percent. The telecommunications equipment sector also fell, by 1.5 percent.

Most top-listed firms on the Kosdaq slipped.

Among those that grew were pharmaceutical company Celltrion Pharm, which added 2.01 percent to 188,000 won, and game developer Pearl Abyss, which grew 1.58 percent to 283,000 won.

The Kosdaq has been growing a lot slower than the benchmark Kospi this year.

Lim Sung-cheol, a researcher from Heungkuk Securities, said investors should look to small caps on the Kosdaq market that are undervalued compared to fair earnings as retail investors have been focusing largely on large caps from the beginning of the year.

"Usually there's a boost for smaller stocks and the Kosdaq at the beginning of the year, but this year large caps and the Kospi are soaring based on retail investor buying," Lim said. "It makes smaller cap shares more appealing at this time."

Kim Jae-yoon, an analyst from KTB Securities, said investment that has been focused on the Kospi's major blue chips could move toward small- and medium-sized companies later in the year.

While announcing this year's policy goals last week, the Ministry of Economy and Finance as well as the Financial Services Commission said they will expand pension funds' investment into the Kosdaq market.

As the country's secondary bourse has been led mostly by retail investors, it has been more volatile than the main bourse. Funds from large institutional investors could stabilize the Kosdaq market, making it more attractive.