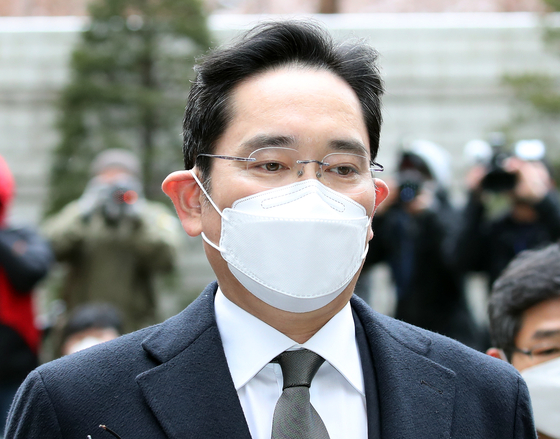 The message was part of a letter posted on an internal system reserved for Samsung Electronics employees, on Tuesday.

“Samsung will continue walking in the right direction, regardless of my personal circumstances,” Lee wrote. “We will fulfill the pledges made to the public and stay true to our role as a company to create investment and jobs. Samsung will transform into a company that fully performs its social responsibilities.”

Lee also thanked staff for staying with the conglomerate in difficult times and apologized for causing worry and creating a big burden.

“Samsung has faced difficulties in and outside the company,” he said. “I express my thanks to employees that have been with us through tough times and would like to ask you to stay with us as a team.”

Lee’s involvement in the high-profile bribery case involving Park’s confidante Choi Soon-sil surfaced in early 2017 when the vice chairman was first indicted by prosecutors. Lee was released from prison after a yearlong detention in February 2019, when his five-year prison term was reduced to a suspended sentence.

In a retrial ordered by the Supreme Court in 2019, Lee was finally ruled guilty for bribing Park on Jan. 18 and was sentenced to two and a half years. Since he spent nearly a year in detention, he has one year and six months left to complete his term. Lee’s lawyers said Monday that their client will not appeal.

The four-year court battle not only cost Samsung legal costs, but also tainted the public image and brand of the conglomerate, which remains one of the largest contributors of Korea’s economy.

“As for myself, I will take a humble reflection [on my actions] and make sure this time isn’t wasted,” Lee added. “I wish to rebuild a new Samsung with the help of all of you.”