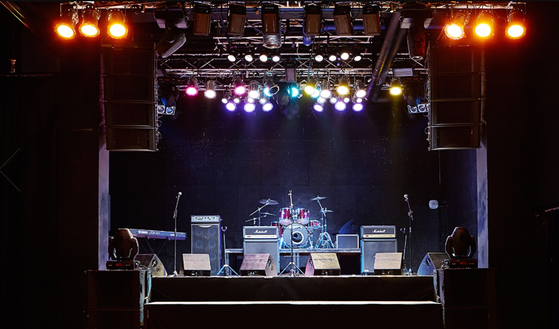 
Major K-pop bands and companies managed to dodge a heavy blow from the coronavirus last year by taking solace online, but it turns out that for those whose options were strictly limited to staying in the tangible world, especially indie concert venues, the cold realities of the offline world may have been too detrimental for some to ever recover.

"During the past year, pop music concert venues have been sustaining our facilities to strictly follow government guidelines even during the near-zero customer visitations," said Lee Yong-hwa, the head of the Korea Live Hall Association on Monday.

"The high rental fees that most concert venues face, as well as the staff members' salaries continue to build up because people can't afford to lose their jobs. Yet the reality is that we still can't perform. This has made it impossible for us to run the venues at all and many have no choice but to shut down."

While other businesses can make do with a small number of visitors and limited hours of operation, it's impossible for small-sized concert venues to do so because the production cost of a concert takes up more than 70 percent of all revenue from tickets, on the grounds that all tickets have been sold out. 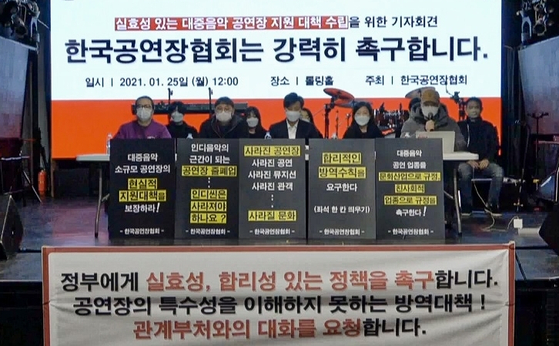 Members of the Korea Live Hall Association on Monday during a press conference demanding the government offer more support to the popular music industry amid the coronavirus pandemic. [KOREA LIVE HALL ASSOCIATION]


"Distancing within a concert venue is practically useless," the association said. "Right now with level 2.5 guidelines, audiences need to be seated at least two seats apart from each other. All we're asking for is that they let us seat half the guests. That would still put us in the red, but at least it's some relief from what's happening right now."

According to the Record Label Industry Association of Korea, 416  concerts were canceled between February and December last year in western Seoul's Hongdae, a neighborhood well-known as the heart of indie music for both producers and artists. The fiscal damage amounts to 2 billion won's ($1.8 million) worth in total, just in the cost of unsold tickets. Added with rental fees and maintenance fees, the damage is expected to be much higher.

Live club Evans Lounge closed its doors earlier this month after running for nine years in Seogyo-dong, western Seoul, as well as Muv Hall, Queen Live Hall and DGBD. V Hall, a major concert venue in Hongdae that has been running for 14 years, also shut down.

"It's not that they've just closed their doors — they have demolished all their facilities and can't go back even after the pandemic is declared over," said Kim Cheon-seoung, president of Rolling Hall. "This is not just the matter of one or two concert venues. The whole pop music industry scene may not go back to the way it was before. We can't even tell how many concert venues will survive to the end."

Though the government has distributed financial aid for performers and others working in the music industry, the association says that the way that those subsidies are given out must also change. The government has "chosen certain venues based on their abilities to carry out and hold concerts despite the hardship they are going through, which is understandable in normal circumstances but not in a crisis like this." 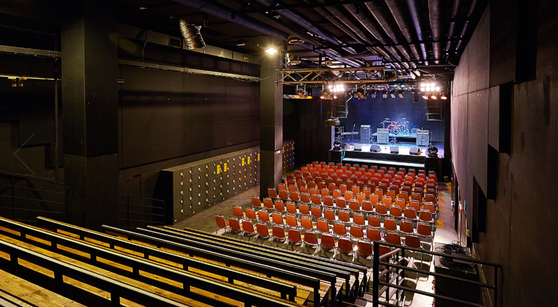 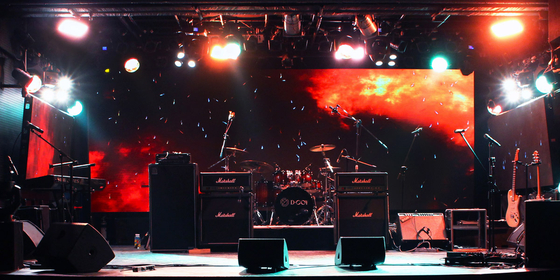 
"The small-sized companies in the popular music industry are in a catastrophic situation like never before in the face of social distancing and non-contact rules," the association said.

The association demanded a new set of guidelines for government funding for musicians and music producers, as well as the provision of means to change the way venues put on their shows — moving from offline to online. Live halls must be equipped with the right instruments and digital gadgets to transform the way they function, and they are turning to the government to help them do so, but not under conditions that cannot be met under current circumstances.

"Performances have been canceled, postponed and canceled all over again. We can't dare to organize other performances and the high rents and maintenance fees are literally shutting us all down. We demand that the government and related bodies engage in active talks to come up with a realistic and rational support system for the industry."