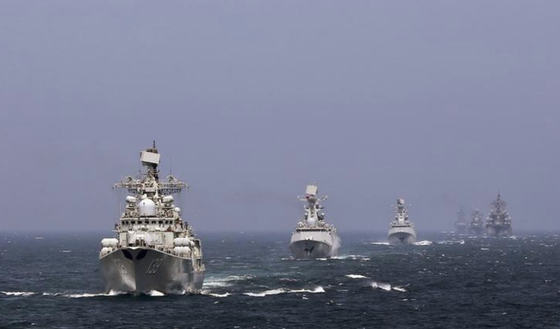 
A Chinese warship came within 40 kilometers of South Korea’s Baekryeong Island in December in what serves as another example of Beijing flexing its muscles in the Yellow Sea.

The imaginary line of longitude crossed by the Chinese vessel is the 124th meridian east; a boundary which has no legal recognition under international laws, but which has long been regarded as what separates Korean and Chinese maritime zones.

But no longer — movement by Chinese military ships beyond the line has been recurring more frequently in recent years.

According to data from the Joint Chiefs of Staff (JCS) and the Navy, patrol ships of the Chinese Navy are seen in waters around the 124th meridian almost every day, while Chinese naval surveillance planes also scour the skies above the line several times a day.

One Korean government source said the Chinese patrol ships often move around the line and cross east into waters close to Korea’s westernmost territory of Baekryeong Island whenever they see fit.


Such actions contravene Beijing’s own warnings issued toward Seoul about violating the boundary.

In 2013, after Beijing included the line in its Yellow Sea area of operations, a high-ranking Chinese naval officer told Korea’s then-Navy Chief of Staff Adm. Choi Yoon-hee that South Korean ships must not cross west of the line.

Choi replied the area around the line is international waters, and that South Korea’s military had to cross over to prevent North Korean submarines from entering South Korean jurisdiction.

Each time a South Korean warship moved west of the 124th meridian since, the Chinese Navy demanded it turn back.

Beijing’s infringements of its own rules about the line are fomenting concern that the country aims to turn the Yellow Sea into an inland sea of sorts.


Just as the Mediterranean Sea was mare nostrum to Rome as it became an empire, China too seeks hegemony over its adjacent waters, putting it in direct collision with its maritime neighbors.

“Using these patrol ships as a start, the Chinese Navy is predicted to use salami tactics to slowly ramp up the frequency and magnitude of its activities around the 124th meridian, using destroyers and aircraft carriers in the future,” said the Korean government source.

“Such behavior seems to stem from an intention to push out South Korea’s influence eastwards toward the peninsula.”


In August last year, a 3,600 ton Chinese Yuan-class submarine was spotted cruising above water around the 123rd and 124th meridians. The Yuan is one of China’s newest submarines, in commission since 2006. It has a diesel electric engine, but according to the U.S. Naval Institute can travel at a maximum speed of Mach 3 and can hold a YJ-18 missile with a maximum range of 220 kilometers (136.7 miles).


Equipped with an air-independent propulsion system, the vessel can remain submerged for two to three weeks, meaning it may have let itself become spotted near the boundary.

In the skies, too, China frequently crosses the line. A JCS report submitted to People Power Party (PPP) Rep. Shin Won-shik showed Chinese military planes crossed into Korea’s air identification zone (Kadiz) — which is party demarcated by the 124th meridian — over 60 times in the last three years. Kadiz is not Korea’s territorial airspace, but it is customary for countries to inform each other before entering another’s identification zone.

Another Korean government source cited intelligence that said the frequent encroachments across the line by China was a result of an order from Chinese leader Xi Jinping to “strengthen maritime sovereignty” over its claims.

The Yellow Sea is an area critical to China’s national security, near which the port of Tianjin, the door to China’s capital, sits.

The sea is overseen by the country’s North Sea Fleet, whose flagship is China’s first aircraft carrier, the Liaoning.

For an aircraft carrier to navigate freely, it must be protected by a radius of around 50 to 80 kilometers. With the fleet’s central base in Qingdao, Shandong Province, just 600 kilometers away from the U.S. military base in Pyeongtaek, Gyeonggi, China fears its strategic fleet could be pinned down in the Yellow Sea by U.S. forces should it fail to exert greater influence over the area.


South Korea’s response to this growing pressure from China has been lackluster.


Choi said most of the Navy’s efforts were tied down by facing North Korea, and there was little energy left to focus on a larger threat in China.

“The Navy tries its best, but it can’t match the Chinese in numbers,” said a military source. “Even if one warship is taken off North Korea duty to patrol west of the 124th meridian, it usually encounters several Chinese warships.”


Experts warn of the dangerous consequences of inaction, which could spell the permanent loss of influence for South Korea in its western waters.


“If we remain silent about the trespassing of the 124th meridian, we are tacitly accepting the Chinese Navy’s area of operations, and thus handing over the Yellow Sea to China,” said Yoon Suk-joon, a researcher at the Korea Institute for Military Affairs, a private think tank in Seoul.

“The issue needs to be brought up diplomatically, and in addition to continuing dialogue with the Chinese North Sea Fleet, naval warships must be periodically dispatched up to the 123rd meridian as part of Korea’s own ‘freedom of navigation’ operations.”