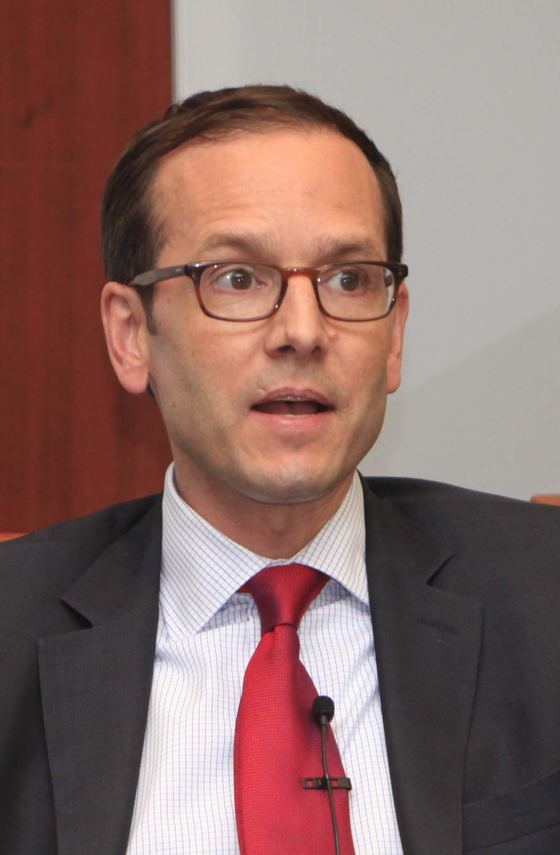 The Joe Biden team is “deeply doubtful that North Korea has any interest in denuclearization,” said Evan Medeiros, a former senior Asia director at the National Security Council (NSC) during the Barack Obama administration.

Medeiros, an Asian studies professor at Georgetown University, told the JoongAng Ilbo last week that the “Biden team has a lot of experience working on North Korea,” including “some experience with a pressure strategy.”

He added, “They're not going to run back to the pressure track of the late Obama years,” but they're also “not going to embrace the Trump policy” of having talks for the sake of talks.

The interview was conducted by videoconference on Jan. 20, right after the inauguration of Joe Biden as the new U.S. president, ending Donald Trump’s four-year presidency.

Medeiros said that the Biden administration will “conduct an assessment of where the U.S. is with North Korea, what's going on in North Korea, and generate a policy from there.”

Biden’s foreign affairs and security team “understand how it has used provocations,” Medeiros said, adding that he doesn’t believe the Biden team is “going to fall for those traps” used by North Korea to elicit concessions.

The Moon Jae-in administration has pushed to build on denuclearization negotiations that began with the Trump administration, and Medeiros noted that Seoul and Washington “are going to have to do some work to align their visions on North Korea,” while still calling it “a very solvable problem.”

Medeiros is known for his role coordinating U.S. policy toward the Asia-Pacific during the Obama administration and is regarded as a key architect of the so-called Asia pivot strategy.

On Seoul-Washington relations, he said, “I'm confident that the Biden team and the Moon team are going to be able to rebuild the U.S.-South Korea relationship that is going to be sustainable for the long term.”


Q. How would President Joe Biden’s North Korea policy be different from that of the Obama administration? Many in the Biden team also worked for the Obama government, but Pyongyang’s nuclear capabilities have grown during the past four years.

A. The Biden team has a lot of experience working on North Korea. They went through many of the cycles that the U.S. and North Korea experienced, going back to the [sinking of the South Korean Navy’s Cheonan warship by North Korea] in 2010. So they understand how North Korea operates. They understand how it has used provocations to try and elicit concessions, how it uses provocation to generate attention. So I don't think they're going to fall for those traps. They are also the team that put together, in the late stages of the Obama administration, the pressure strategy, really putting serious pressure in close coordination with the South Korean government at the time — a strategy that the Trump administration picked up and ran with, of course, until they decided to have the two leaders meet in Singapore. And so, I think that there's some experience with a pressure strategy.
But as you pointed out, the North Korean program is in a different place. North Korea itself is in a very different place because of the ravages of Covid. And you know how economically isolated and austere the conditions are now. [The Biden team] is an experienced team that has no illusions. And I think it’s ready to get in there, conduct an assessment of where the U.S. is with North Korea, what's going on in North Korea, and generate a policy from there. So in other words, they're not going to run back to the pressure track of the late Obama years. They're not going to embrace the Trump policy of, “Yeah, let's just try and get back to talks.” I think they're going to conduct a policy review. They're going to be very careful, very judicious if they believe that providing humanitarian aid is the right thing. I think they're going to be open to doing that. But that shouldn't be misinterpreted as a signal that they're ready to go back to talks because I think they remain deeply, deeply doubtful that North Korea has any interest in denuclearization.


Q. The Moon Jae-in government would like the Biden administration to inherit Trump’s North Korea approach; could this lead to friction between the two sides?

A. I think that there's a lot of understanding of Moon’s approach to North Korea. And that will certainly be part of the policy review on North Korea. And if there are some differences, then the U.S. and South Korea will have to work that out. But that's not new, whether or not you go back to other progressive leaders in South Korea, like [former President] Kim Dae-jung. The U.S. and South Korea are allies, they're democracies. And when we have differences, we work through these differences. […] I think that Biden getting elected is an enormous opportunity to put the U.S.-South Korea relationship back on the trajectory it was on under the Obama administration.

A. Well, this is going to be a very, very interesting drama to watch unfold.


Q. What should we expect in South Korea-U.S. relations in the Biden era?

A. I'm very confident about the U.S.-South Korea relationship under Biden. I think, personally, there'll be a good relationship, a good personal relationship between Moon and Biden. They're both very experienced politicians. They're very personable people. And I hope that the connection between them is able to — while it doesn't solve policy issues — create a very permissive and just a positive climate for addressing difficult issues.

Number two, you have a lot of very experienced people — Kurt Campbell, Tony Blinken, Jake Sullivan — who know the importance empirically, theoretically, practically, of the U.S.-South Korea relationship, and they want to fix some of the problems, some of the damage, that has happened during the Trump years.

Number three, they're not ideologically opposed to U.S. troops on the Korean Peninsula, like Trump was. Trump had a secret agenda. He was trying to kill the U.S.-ROK alliance and move troops off the peninsula. That's why he pursued talks with North Korea. That's why he put these aggressive demands on burden sharing the table. All of that goes away under Biden.

I think that the U.S. and South Korea are going to have to do some work to align their visions on North Korea. But I think that's a very, very, very solvable problem. And then when it comes to building an economic policy that works for the middle class, Biden is not going to ask to renegotiate the Korea-U.S. FTA for a third or a fourth time.

For the United States, South Korea is not just an ally, it's a democracy. And it's also a regional power in Asia that has a global profile.


Q. President Biden said he will compete with China but also cooperate with it. Is this possible?

A. I believe that there are four baskets of competition. Diplomacy and national security, you know, obviously, issues like Taiwan, Hong Kong and Chinese military modernization. Number two is economics. Simply the way the Chinese government operates its economy at home and disadvantages foreign companies, American, South Korean, et cetera. Number three is technology. And the extent to which the Chinese are seeking to dominate the key technologies of the future, often using illicit means to do so and making sure that the United States retains the advantages it has. The fourth issue is really a question of values, and basic fundamental values about how both international politics works, the belief in rules, norms and institutions, but also the belief in basic political and civil liberties.

On the issue of cooperation, those are often summarized as climate change, Covid, the global economy, sometimes nonproliferation. But I think the key challenge for the Biden administration is going to be can they coexist. Because you could imagine a situation where the differences in values and perspectives becomes so stark that it's difficult to sustain cooperation. So in theory, the U.S. and China can cooperate and compete if those areas of cooperation really do serve both countries’ interests.


Q. The Biden administration announced it plans an international summit for democracy. How does this differ from the Trump administration’s strategy to get allies to join in on a pressure campaign against China?

A. The [Biden administration’s] strategy is to make the United States part of the partner of choice, for America to simply be a high-quality partner that countries want to work with us, diplomatically, militarily, economically. We fully understand that many countries all over the world have China as a major trading partner, if not the top trading partner. So, it doesn't make sense to ask countries to choose between the United States and China.

America itself is deeply interdependent with China. The Trump administration flirted with the decoupling, the economic decoupling agenda, and it didn't work. So we can't ask countries to do something that we weren't prepared to do ourselves. But just because we're not asking countries to make a big strategic choice, America or China, doesn't mean that countries don't need to choose on some smaller issues. And when it comes to something like the summit of democracies, the summit of democracies is not about bashing China. It's not about bashing Russia, right? It's standing up for values and principles that have been enormously important to the successful, current international order.


Q. Do you think we should expect provocations from Kim Jong-un?

A. My guess is he probably won't do anything big, like a nuclear test or a missile test, because, number one, the Chinese really don't like that. And it would probably result in some frustrations and challenges in the China-North Korea relationship. I think North Korea is going to try to determine what exactly the Biden administration wants, so maybe some missile tests, but nothing similar to the past two inaugurations. I think North Korea has a lot to lose, if it triggers American condemnation; a new UN Security Council resolution and even more pressure.