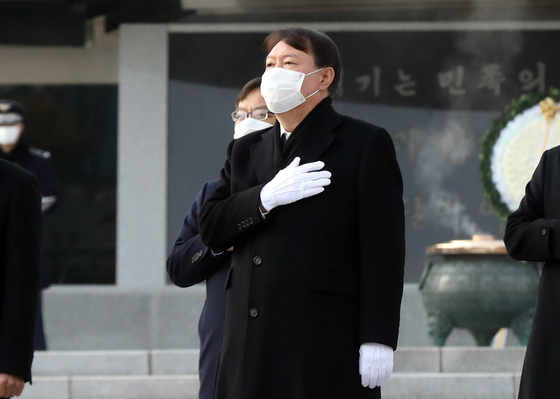 Prosecutor General Yoon Seok-youl salutes the national flag during his visit to the National Cemetery in Seoul on Jan. 4. [NEWS1]


Prosecutor General Yoon Seok-youl’s popularity as a presidential candidate is steadily falling in recent polls after his war with the Moon Jae-in administration came to an end.

In a Realmeter poll announced on Jan. 3, Yoon scored 30.4 percent to top the list. Gov. Lee was a distant second with 20.3 percent and chairman Lee with 15 percent. (More details of the polls are available on the internet site of the National Election Survey Deliberation Commission.)

“Yoon’s popularity certainly dropped,” Lee Gang-yun, head of the KSOI, said. “We see a trend that [his popularity] is wearing thinner and thinner.”

Public support for Yoon as a presidential candidate started because of his war against Justice Minister Choo Mi-ae, political observers said, explaining that whenever Choo attempted to oust Yoon, the public saw him as a political martyr. Even ruling party members have admitted that the harder Choo tried to attack Yoon, the more Yoon’s popularity grew.

That trend changed after Moon replaced Choo on Dec. 30, 2020, effectively ending the yearlong war between the justice minister and the top prosecutor.

“After Choo was replaced, Yoon practically disappeared from the media spotlight, and that was reflected in the recent polls,” an analyst remarked.

Moon also showed a measure of support for Yoon. During a New Year’s press conference on Jan. 18, the president said, “Yoon is the prosecutor general of the Moon administration.”

Moon also said, “I do not think Yoon is serving the prosecutor general post with a plan to become a politician after his term.”

Yoon has made an ambiguous remark about his future after the prosecutor general’s tenure. His two-year term ends in July this year.

At the National Assembly audit in October last year, Yoon said, “I will take time to think about how I can serve society and the people after my term.” Politicians largely interpreted that to mean he left open the possibility of running for office.
The public, however, seemed confused about Yoon’s remark.

According to a WinGKorea Consulting’s survey conducted on Jan. 16 and 17, 33.9 percent of people said they thought Yoon would run in the presidential election while 45.9 percent said they didn’t think he would run.

“Until Yoon publicly and clearly declares his political ambition, we should consider that his popularity is overrated,” KSOI’s Lee said. “The loyalty of his supporters is weak, and they can always support someone else.”