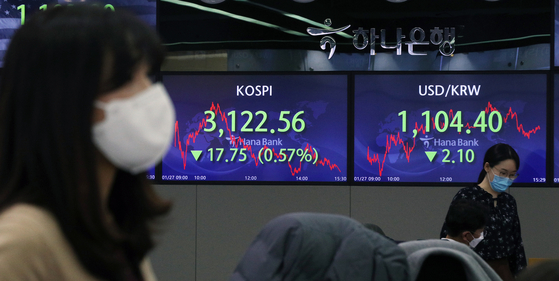 
Stocks slumped after a choppy session Wednesday, largely due to heavy foreign selling related to concerns over fiscal policy tightening in major financial markets. The won rose against the dollar.

The Kospi got off to a muted start ahead as investors waited for the results of the U.S. Federal Reserve's policy meeting, and losses widened in the afternoon.

Faster-than-expected recovery in the Chinese economy also raised worries that emerging economies may hasten the tightening of their fiscal policies.

"Foreigners [had bought because they] have been optimistic about [a fast recovery in] Korea's economy," Eugene Investment & Securities analyst Huh Jae-hwan said.

"But the recent hike in China's short-term interest rate seems to have made them wary," he added.

The local currency closed at 1,104.4 won per dollar, down 2.1 won from the previous session's close.