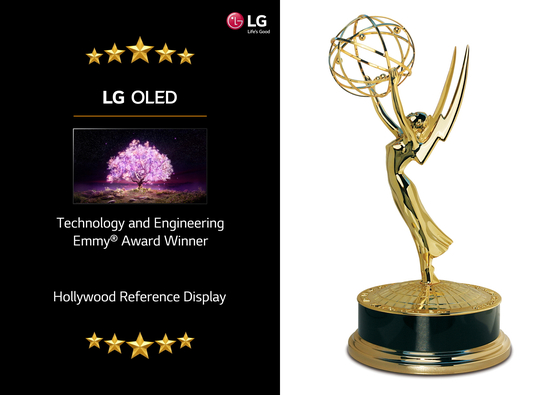 Images created by LG Electronics to recognize the Emmy Award that the company received for its OLED technology on Monday. [LG ELECTRONICS]


LG Electronics has won an award for its organic light emitting diode (OLED) technology at the 72nd Annual Technology & Engineering Emmy Awards in the United States, the company said Wednesday.

LG was named as a recipient for the award announced by the U.S. National Academy of Television Arts & Sciences (Natas) on Monday. The company was honored alongside Sony Electronics for its contribution to the viewing experience.

OLED televisions have been used by major movie studios and content developers and distributors in order to review how their work is expressed on screen, the company said in a statement. OLED technology offers an exceptionally high contrast and image quality, making it suitable for professional content creators, such as directors.

According to Natas, the Technology & Engineering Emmy Awards are awarded by a committee of designated “engineers working in television” to an individual, a company or scientific or technical organization for innovative achievements that affect television.


“We are extremely proud that LG OLED TV has been acknowledged with one of the TV and broadcasting industry’s most iconic awards,” said Nam Ho-jun, senior vice president of research and development at LG Electronics.

The reward was given under the “OLED Reference Monitors for Creative, Technical, Quality Control and Client Viewing” category.

The award ceremony will take place in partnership with the National Association of Broadcasters (NAB) at the fall NAB Show, an annual trade show, on Oct. 21. in Las Vegas.