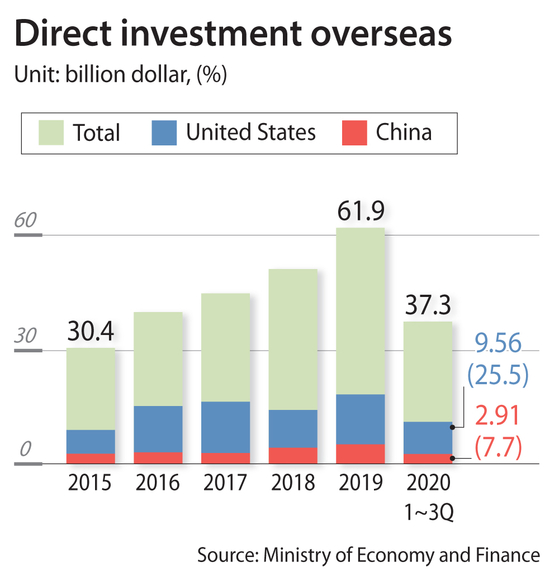 Korean companies are turning toward the United States and away from China in moves that are both opportunistic and exercises in risk management, as geopolitics heat up and dangers mount.

The shift is significant. While it has been assumed that Korea will split the difference and side with the United States on defense and China on business, recent investments suggest that it might tilt toward the United States across the board.

Bloomberg reported that Samsung Electronics is considering investing $10 billion in a semiconductor factory in Texas.

“Ever since the beginning of 2019, when CJ CheilJedang acquired U.S. food company Schwan’s Company in a 2-trillion-won [$1.8 billion] deal, investments into U.S. companies by major local companies have continued,” said Choi Won-pyo, a senior partner in Bain & Company.

U.S. President Joe Biden signed an executive order to strengthen “Buy American” provisions to support local manufacturers, businesses and workers. The order is to ensure that the U.S. government will invest “taxpayer dollars” in U.S. businesses.

Data over the past few years support the trend of investing in the United States. According to the Ministry of Economy and Finance, direct investment in the country has been on the rise since 2018. In 2018, Korean investment in U.S. companies was 21.9 percent of the total overseas investment. The value continued to rise, hitting 23.8 percent in 2019 and 25.5 percent throughout the first three quarters in 2020.

Korea has been lowering exposure to China. In 2018 and 2019, 9.3 percent of Korea’s direct investment went toward China, but the value decreased to 7.7 percent in 2020. Over the past six years, the share going toward China has been declining after peaking in 2015 at 9.8 percent.

Trade disputes between the United States and China and the tensions that emerged from the deployment of a U.S. anti-missile system have affected the investment trend.

“In the middle of the trade dispute between the United States and China, local companies have selected the American market,” said Lee So-won, chief of the international cooperation team at the Federation of Korean Industries (FKI). “Local companies invested in Chinese firms due to the low labor costs, but the allure of the Chinese market has lessened.”

“The effects of China’s economic retaliation to the Thaad deployment crisis still remain strongly in the minds of local firms,” Choi said, referring to the U.S.-led Terminal High Altitude Area Defense antimissile system. “This tendency is likely to continue for a while.”

Local companies are concentrating their investments in energy. Starting with its investment into Nikola, Hanwha branched out to more U.S. firms, acquiring U.S. energy software company Growing Energy Labs (Geli) and hydrogen tank company Cimarron Composites. In the beginning of this year, Hanwha decided to establish a joint venture worth 2 trillion won with French energy company Total for a solar energy project that targets the U.S. energy market.

Investment into batteries for electric vehicles (EV) in the United States is increasing. LG Energy Solution and SK Innovation are currently building EV battery factories in the United States, or are planning to build more. Industry professionals say that the investment is in line with the Biden administration’s eco-friendly policies.

“The Biden administration has been leading eco-friendly industries like EVs and the transition into clean energy,” Lee said. “It may be a good opportunity for Korean companies.”
SK announced on Jan. 7 it will acquire a 9.9-percent stake in U.S.-based hydrogen fuel-cell maker Plug Power to expand its hydrogen business.

The U.S. market for EVs, which is dominated by Tesla, is attractive for Korean companies because new businesses are emerging at a fast rate. Hyundai Motor recently announced its foray into the U.S. hydrogen truck market.

Hyundai Motor Chairman Euisun Chung is commitment to a shift to robots. In December, Hyundai acquired a controlling stake in robot maker Boston Dynamics, purchasing 80 percent of the company from SoftBank Group for $1.1 billion.

“The United States, which has Silicon Valley, has been transforming at the fastest rate in the world since the coronavirus pandemic as the IT sector and conventional industries intersect,” said Jung Tae-kyung, an artificial intelligence software professor at Sehan University. “For local companies, the [U.S.] market is indispensable when vying for the upper hand in the future industries.”

There are some aspects to be cautious about as well. Biden’s slogan, “Make it in America,” is one of the biggest variables for Korean companies to consider. According to the FKI, the “Buy American Provisions” represent three main U.S. economic policies in the Biden era, which are ensuring that goods are made in the United States, materials are purchased and procured in the United States and overseas headquarters are brought back to the country.

Some predict that local companies will be at the crossroads between the United States and China as it is likely that the Biden administration will continue to be hostile toward China, adding that Biden’s nomination of Katherine Tai as the U.S. trade representative will heighten the chances that the trade tensions between the two countries will continue.

“The hostile policies toward China are likely to continue to be centered around the semiconductors and ICT industries,” said Yoon Yeo-joon, head of the Americas team at the Korea Institute for International Economic Policy.

“The local companies need to prepare for the conflicts between the two countries by taking measures.”