Jeonju gets a 3-D twin to help with urban planning

Jeonju gets a 3-D twin to help with urban planning 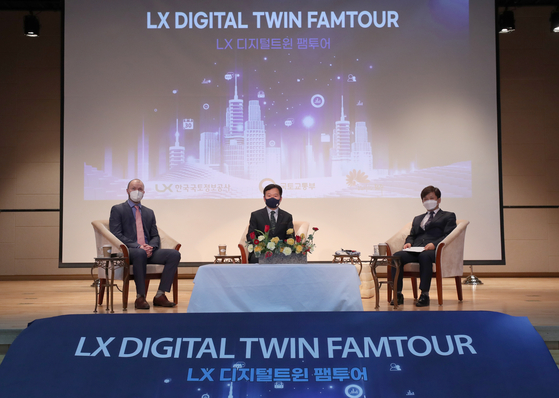 
JEONJU, North Jeolla — Imagine seeing a 3-D model of Jeonju, North Jeolla, from a bird’s eye view. You can zoom in to take a look at each floor of Jeonju City Hall and even find out what material was used in its construction. Checking out how the city looks at different times of the day is also possible.

These virtual replicas of the real world are called digital twins.

As well as being interesting to look at, either on a computer screen or in virtual reality (VR), digital twins are the foundation for the government’s smart city goals.

Together with LX, a state-backed land information company under the Ministry of Land, Infrastructure and Transport, Jeonju is at the forefront of Korea’s digital twin technology.

Around 30 percent of Jeonju’s 200 square kilometers (77 square miles) has been recreated as a 3-D model since the project began in 2018. The plan is to complete modeling of the entire city by the first half of this year.

“A digital twin makes it possible to simulate projects in VR that are difficult to conduct in reality,” said Kim Gi-seoung, vice president of LX, at a press event held in Jeonju on Tuesday. “It can be applied in various fields, including traffic and the environment.” 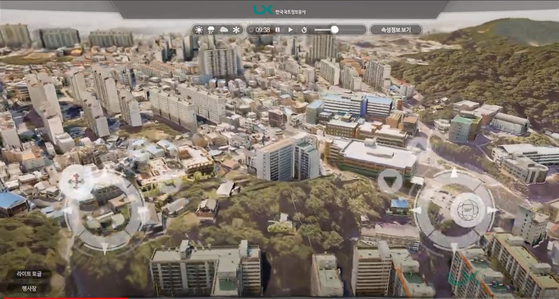 An image of the 3-D digital twin of Jeonju. [SCREEN CAPTURE]


Finding the right spot to plant trees to resolve the city's urban heat island effect has been one of the city’s primary projects. Jeonju, which is in a valley, has seen temperatures rise in recent years due to rapid urbanization and high-rise apartments, which has disturbed the way wind moves through the valley.

“Jeonju is conducting a campaign to plant 10 million trees through 2026 to combat the urban heat effect,” said Choi Myung-kyu, the vice mayor of the city. “In simulations, Jeonju has measured the change of temperature and view depending on where trees are planted.

“We get to find out the expected effect in advance, which we would have had to wait 30 years for without the simulations," said Kim from LX.

Using 3-D simulations, LX has positioned trees to annually absorb an estimated 810 tons of carbon dioxide while emitting 583 tons of oxygen based on data collected from 2018 and 2019. The trees are also estimated to absorb 11.6 kilograms (25.6 pounds) of fine dust a year.

LX could not provide a comparison with trees that were planted without the simulation.

Fighting fires is one area that could benefit.

On a 3-D model of a building, firefighters can learn about the interior materials used and how many people reside on each floor. This helps them decide where to concentrate resources and how many firefighters to dispatch.

The modeling also makes sure firefighters get the most up-to-date information of the building, unlike a printed floor plan, according to Park Sun-woo, a spokesperson for LX from its smart platform department. 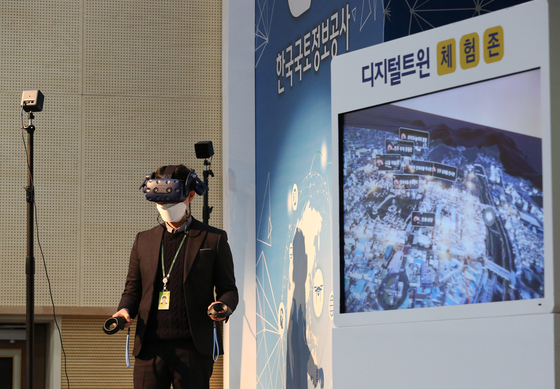 An employee from LX views a virtual reality 3-D model of Jeonju. [MOLIT]


As good as they sound, digital twins also come with cost and security concerns.

Digital twins constantly need to be updated in line with changes made in the real world, meaning costs will continue to rise.

“As a public institution, there is a limit,” said Park. “Private companies are hesitant to jump into creating 3-D models of a city because it’s such a big project.”

Park also expressed concerns over the level of exposure of private information on a 3-D model.

“To what extent private information should be revealed, like the average number of daily customers at a restaurant or its annual revenue, is still being considered,” Park added.

Samsung commits to $356 billion of investment over 5 years

On the road to autonomous driving, a good map helps