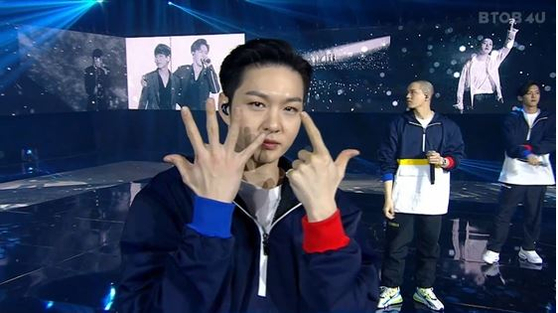 
K-pop boy band BTOB continues to be at the center of controversy, this time with hand gestures the members made during a live online concert on Jan. 23.

During the online concert, several members of BTOB 4U, a subunit of now six-member BTOB (Jung Il-hoon recently left the group following allegations of marijuana use), held up seven fingers to take pictures after the performance.

However, with Jung out of the picture for alleged criminal activities, such hand gestures trying to show that they are still a seven-member group earned criticism from audience members.

With growing backlash, BTOB leader Seo Eun-kwang posted a long apology on his Instagram on Wednesday, stating that he is sorry as the team leader and as himself that BTOB stirred up trouble once again, not long after shocking them with Jung’s marijuana allegations.

“First I want to sincerely apologize to those who got hurt by our actions and words at the concert,” Seo wrote. “I understand very well that everyone wanted to try to start anew by watching the concert while carrying a wound that has yet to heal.”

Through his post, Seo made it clear that “six of us will make a full group in November.” Currently two members, Yook Sung-jae and Lim Hyun-sik, are serving their mandatory military service which they are set to complete by November.

Meanwhile, Jung is currently under investigation on charges of using marijuana. Jung is alleged to have purchased marijuana from an acquaintance using virtual currency, which amounts to about 100 million won ($90,500). Jung is also currently serving his mandatory military service.