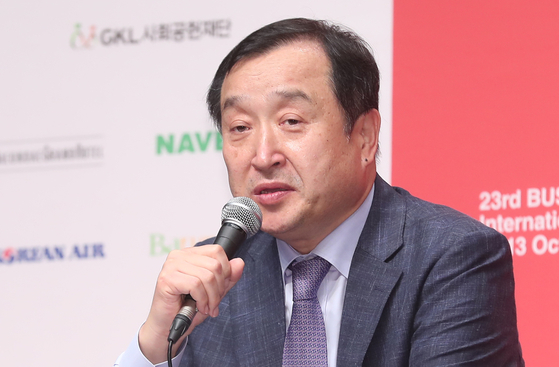 
Busan International Film Festival (BIFF) director Jay Jeon, known as Jeon Yang-jun in Korean, is leaving the position after 25 years, he announced through his Facebook account on Tuesday.

In a post titled “Leaving BIFF,” Jeon started off by saying “I will be leaving the BIFF as of the 31st of January 2021 to pastures new after 25 years, time which has mostly been happy and rewarding although some of it was peppered with painful moments.”

The director said that he had “no regrets” as he felt that he’d dutifully done his part in the establishment and development of the festival which has become Asia’s largest and most prestigious film event.

“But I do feel extremely sad that I am leaving BIFF not having resolved the difficult issue of the founders and leaders of BIFF being pitted against each other as they are exploited by politicians driven by various ulterior motives,” Jeon wrote.

Local reports say that Jeon’s decision was autonomous, made without any internal discussion or interaction with the rest of the festival board. As of this January, Jeon has been the executive director of the festival for three years, and the committee was to decide upon Jeon’s consecutive appointment next month.

Jeon did not state explicit reasons behind his leaving. However, the director wrote that it was highly likely that he will be working at another film festival.

Jeon is one of the original members who’s been part of the BIFF since its foundation. He started off as a programmer for the festivals’ World Cinema category in 1996 and played a role in introducing various overseas films which local audiences may have had difficulty accessing.

He received a medal for his contribution to prospering cultural development in 2011 from the Czech Republic’s department of foreign affairs and received an achievement award at the Florence Korea Film Fest in 2014.

The break in his career derives from a clash between the Busan Metropolitan City Government and the film festival in 2014 after the latter went against the city government’s request to remove the film “Diving Bell” — a film about the Sewol Ferry tragedy — from screening at the 19th edition.

Jeon and then-executive director Lee Yong-kwan, were removed from their respective positions briefly before the board reinstated them as executive director and chairman of the festival board as BIFF was boycotted by local filmmakers for two consecutive years, demanding an apology for oppressing the event’s artistic freedom and the reinstatement of the former directors.