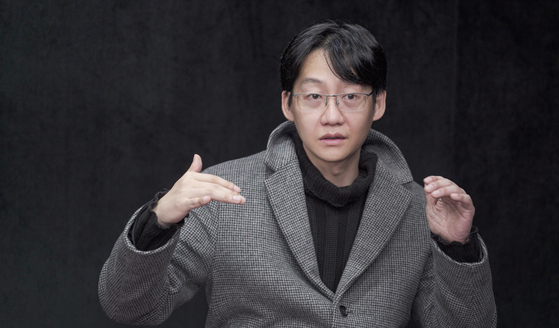 Director Lee In-eui during an interview with the Korea JoongAng Daily at its office in Sangam-dong in western Seoul about his film ″The ABCs of Our Relationship.″ [JEON TAE-GYU]


Director Lee In-eui describes himself as a “pervert.” He's labeled himself this way simply because he says his main motivation for life comes from relationships and the interactions that come with them.

His second feature film, “The ABCs of Our Relationship,” set to premiere at theaters nationwide on Thursday, is, unsurprisingly, centered on relationships. The story revolves around Min-kyu and Han-na who are part of the production staff creating independent documentaries. In the film, the pair work on three documentaries together covering the issues of overseas adoption, separations of families due to the Korean War and protests by laborers of guitar company Cor-tek, who are trying to get their jobs back after being unfairly laid off.

The issues the characters face all derive from Lee’s own experiences as an independent documentarian.

“I think the film compressed 10 years of my life together from my late 20s to my late 30s,” the director said during an interview on Monday.

The Korea JoongAng Daily met with the director at its office in Sangam-dong in western Seoul to discuss more about “The ABCs of Our Relationship” and the local industry for independent films. The following are edited excerpts.


Q. Can you elaborate on your experiences with the three issues that the film centers on?
A. It happened all by chance. In the case of guitar laborers, I was asked by director Kim Sung-kyun who created “Other Guitar Story” (2009) and “Dream Factory” (2011) to come help him film. I just went there by his request — before that interview I never knew what the workers were fighting for or anything about their layoffs — but that interview left a huge impact on me.

I was originally a screenwriter for commercial films, but I opened my eyes to documentary after that. I ended up helping Kim film those two documentaries for three years after that. As for separated families, I was part of the archiving project organized by the Red Cross and Ministry of Unification in 2013. For six months, I traveled all over the country except for Jeju Island and met with about 100 interviewees whose families were separated due to the war. Between the pains of loss and tragedies of the war, I loved glimpsing into the cherished memories they had about their loved ones.

For overseas adoption, I had a friend who was in a similar situation as Joo-hee. Then I got interested enough to do my own research. I don’t know, maybe I thought I knew all about the adoption process since I’ve lived in Korea for so long, but when I looked into it there’s a huge difference between local and overseas adoption, and there are still [necessary] bills that need to be approved. I realized that what I knew was nothing, and I wanted to talk about the legalities of the overseas adoption process in this movie. 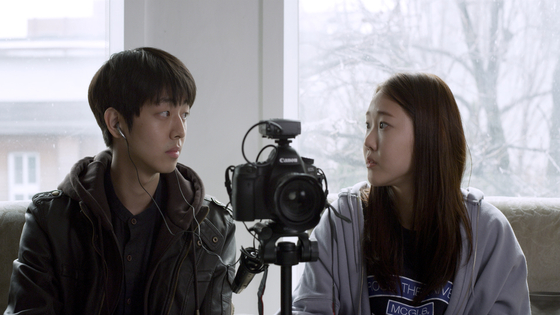 Actors Eun Hae-sung, left, and Oh Ha-nui as Min-kyu and Han-na, who work on independent documentaries together. [CINEMADAL]


Q. Why was that interview with the Cor-tek workers so memorable to you?
A. It’s a personal thing, but when I was still in school, my father was in the same position as those factory laborers that were protesting. But I wasn’t interested at all — and back then the news depicted the labor-related conflicts as something violent. It didn’t show why they were fighting and why these people need unions. So I, too, only thought of it as something bad and perhaps I just didn’t want to know what he was doing.

Then in my early 30s I met these Cor-tek workers at their protest and what hurt me the most was that I realized that I could have heard all of this from my father, not them, [but instead] I took the long way. I understood them then, and my father too. I’ve always felt that I need to atone for [my indifference] so that’s why I have a special attachment to this issue. 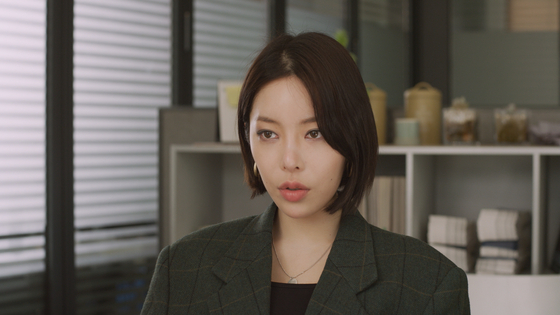 Actor Lee Seo-yoon as Joo-hee, an overseas adoptee from France who's visiting Korea for a few days to search for her birthmother. [CINEMADAL]


Q. When I saw the film, I was surprised by how fluent the actors were in multiple languages. Can you tell me more about the casting process?
A. Actor Lee Seo-yoon (who portrayed Joo-hee) was the hardest to cast — due to the plot setting she needs to speak French natively and also speak English. There really wasn’t an actor who fit these two criteria. I was extremely lucky to meet her. From what I know, she spent 15 years in France, so of course she’s a native in that language and can also speak English and Spanish. Korean is the language that she learned in her 20s, and she’s even good at that.

But she’s originally not an actor, and I only happened to meet her through my string of acquaintances. It happens that her cousin’s husband is my friend, director Park Jae-yoon, (laughs). He uses an office next to mine in Sangam-dong and he introduced me to her. But initially Lee had no intention to act at all, and she only obliged because I practically begged her, and she could relate to Joo-hee because she also lived in Korea until she was four and went to France. Her memories in Korea are very vague, and she said that she was the only Asian in her town.

She still doesn’t have any plans to become an actor. She wants to remember this as a special episode in her life.


Q. What do you think is the charm of independent documentaries?
A. I think whether it’s a film or a documentary, commercial or independent, they’re all a form of medium, but if the adjective “independent” follows, it means that it’s marooned from the capital.

That’s what makes it [the medium] so attractive. When I worked as a screenwriter one of the hardest things was that I was a subordinate of the producers, the companies and the capital. That’s when I realized how difficult it was to say what I wanted [in commercial projects]. But when the word "independent" goes in front of it, I can do that. That’s the biggest difference and charm of this field. Of course, though, we’re always in need for more financial support for our productions.


Q. In the film, Min-kyu considers quitting making documentaries because he can’t make a living out of it. You must come across a lot of directors who face similar problems. Do you think that if the financial burden were lifted from their shoulders, all of their worries would be resolved?
A. If the financial aspect is taken care of, there is [still] the fundamental issue that we need to resolve. I’m telling this in a straightforward manner, but there is a limit to how far this culture [of watching independent documentaries] is being cultivated [at present]. For instance, the annual box office sales, for independent films, I believe won’t surpass 10,000 in audience numbers.

So even if we’re no longer financially deprived, the next problem at hand is whether or not we can interact with the audience. Let’s say that I’m given 1 billion won ($905,075) and I’m allowed to make whatever film I want. What happens at the next step when the film meets the audience is a whole other problem. As soon as the word "independent" is added, the works can only be viewed through indie cinemas. But I’m not sure about the future because people can now reach a variety of films and documentaries through streaming platforms. So maybe we can anticipate more from those areas. But as of right now, even if the financial problems are taken care of, we still feel frustrated because even if the film premieres, there’s only a few cinemas where the audience can see it. 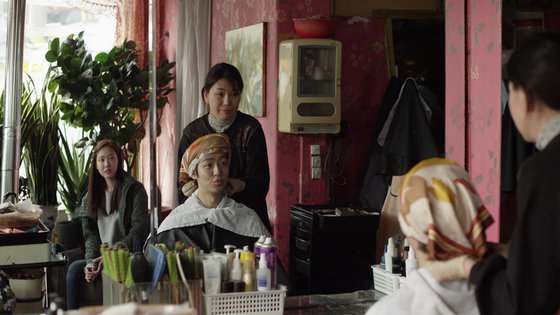 
Q. Then what motivates you to continue in this profession?
A. This is also personal, but what I love the most about documentaries is when I’m interviewing — that’s the driving force and stimulus that leads me to continue the work I do.

When I interview someone, they reveal their pain and hurt to me. And they know, that it’s not going to resolve anything by talking to someone like me. But that act of talking to someone else about it [and having an attentive listener], heals them, in a way. It’s the moment when we become very truthful with each other, and I cherish moments like that.


Q. What’s up next for you?
A. I’m planning to attend all the 'guest visits' (where directors and the actors visit cinemas after screenings to meet and hold discussions with audience members) to meet and talk to as many audience members as possible. And as this film’s release was postponed for a year due to the coronavirus, I have written another thriller. But I don’t think this script can go into production right away because investments in films this year have ground to a halt. It’s also an independent film — but it’s also based on a real-life event.

The ABCs of Our Relationship director Lee In-eui independent film

[FICTION VS. HISTORY] 'Assassination' director sprinkles fiction over the facts