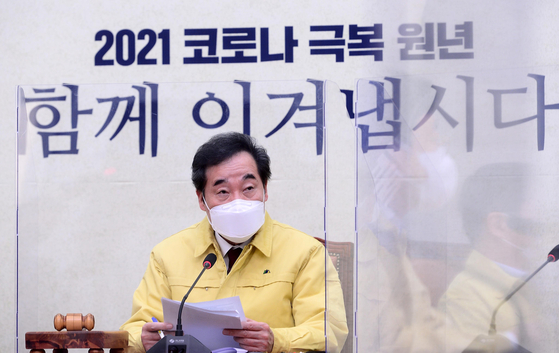 Chairman Lee Nak-yon of the ruling Democratic Party speaks during the Supreme Council meeting in the morning on Wednesday at the National Assembly. [NEWS1]

"The National Human Rights Commission has come to the conclusion that Park had sexually harassed [the secretary], and we accept the outcome of its investigation with a heavy heart," Chairman Lee of the Democratic Party (DP) said Wednesday during the party's Supreme Council meeting. "I deeply apologize to the victim and her family. I also apologize to the people."

Park's former secretary filed a complaint with the police on July 8, 2020, claiming that the mayor sexually molested her for years. Park found out about her plan to file a complaint a few hours before it was filed from his special advisor on gender equality. He went missing the next day and was found dead on July 10. Police concluded he committed suicide.

While any criminal investigation into the allegations was closed due to his death, the victim's lawyer requested the National Human Rights Commission probe the case. The commission announced Monday that the victim's claim of Park's sexual molestations has been accepted as truthful.

Chairman Lee's latest apology was the second of its kind. In October, Lee issued a single sentence perfunctory apology to the victim when he announced the decision to revise the party's Constitution to nominate a candidate to fill Park's vacancy in the April 7 by-election.

When President Moon Jae-in was the chairman of the DP, it introduced a clause in the Constitution that it will not field a candidate for a by-election if the spot was occupied by a DP member but vacated due to his or her wrongdoings, including a sexual crime.

Under Lee's leadership, the party removed the clause and is holding a primary to nominate a prominent politician to win back the post.

In his latest apology, Lee said the DP will do its best to help the victim return to her normal life. He also said the party will follow through with the rights commission's recommendation to the Seoul Metropolitan Government and the Ministry of Gender Equality and Family to improve sexual harassment prevention systems.

Lee also vowed to overhaul the Korean society's deeply rooted culture of discriminating against women. "We will revise relevant laws where workplace authority is abused to commit sex crimes," Lee said. He also vowed to provide education for DP members in order to root out sexual misconduct and promote gender equality.

The PPP's female lawmakers issued a joint statement on Wednesday to condemn Lee. "Although he has showed no hesitation to attack the victim by defending the offender for the past six months, he suddenly issued an apology in a political show ahead of the election," they said.

They also pressured DP contenders Park Young-sun and Woo Sang-ho to make public their positions about the late mayor's sexual harassments since they are "shamelessly" running to fill his vacancy.

"Keeping silence means protecting [former Mayor] Park, and running in the mayoral race is another attack at the victim," they said.

Both contenders Park and Woo have been asked about their position regarding the victim whenever they had media interviews. Park, a female politician, said Wednesday in a radio interview that "If there are ways for the DP to apologize to the victim, it must do everything."

Woo said he will announce his stance on Thursday. He also said the PPP is politically using the victim for the election.