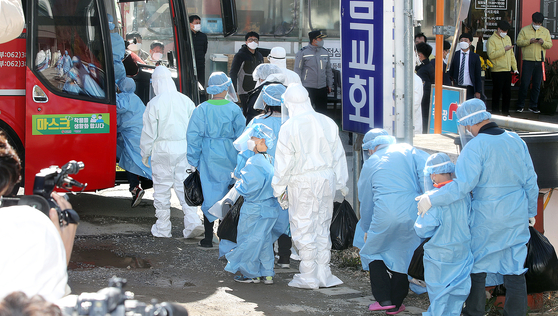 Students infected with Covid-19 at the TCS International School in Gwangsan District, Gwangju, board a bus to be transferred to a treatment center after more than 110 people were diagnosed with the virus as of Wednesday. [YONHAP]

New daily Covid-19 cases shot back over 500, the highest figure in 10 days, with outbreaks from missionary schools spreading across the country.

The city of Gwangju saw its highest-ever number of coronavirus cases with outbreaks at two schools run by the International Mission (IM), a Korea-based missionary society that runs over two dozen church-related educational facilities across the country.

The TCS International School in Gwangju's Gwangsan District reported 110 new Covid-19 cases as of Wednesday, according to the Central Disease Control Headquarters. This followed testing of all 135 students, faculty members and visitors to the school on late Monday. There were 122 students boarding at the school.

The infected patients included 77 students, 25 faculty members and seven churchgoers. While around half of the boarders were from Gwangju, others were from other parts of the country including Seoul and Busan. Authorities found that the students didn’t wear masks or practice social distancing, in addition to living in closed quarters and dining together.

Of the infected students, 67 are under 13, while the others are in their teens.

The Gwangju Ace International School in Buk District reported a total of 24 cases as of Wednesday.

After a Covid-19 case was confirmed on Jan. 23 at a church in Gwangju, located in the same building as the TCS Ace International School, health authorities conducted testing of the related schools and an affiliated kindergarten.

A child care center in Gwangju run by IM teachers also saw a total of 13 cases as of Wednesday.

Health authorities said that there are four IM-related facilities in Gwangju, including the two boarding schools.

This follows a similar cluster at the International Education Mission (IEM) School in Daejeon, also owned by IM, which has 176 cases so far after testing of students and faculty.

A group of 39 students and instructors from the IEM School were confirmed Covid-19 positive while on a retreat at a church in Hongcheon County, Gangwon, since Jan. 16.

Because these missionary schools are not authorized by the government, they were under the radar of health authorities.

The TCS International School in Gwangsan reportedly held dancing and singing classes in enclosed classrooms without any mask-wearing.

The Central Disaster Management Headquarters said that IM has at least 23 facilities in 11 cities and provinces and has ordered a massive testing of IM-related facilities across the nation. There are 841 people working or studying at IM educational facilities, according to health officials, but this number is expected to grow. 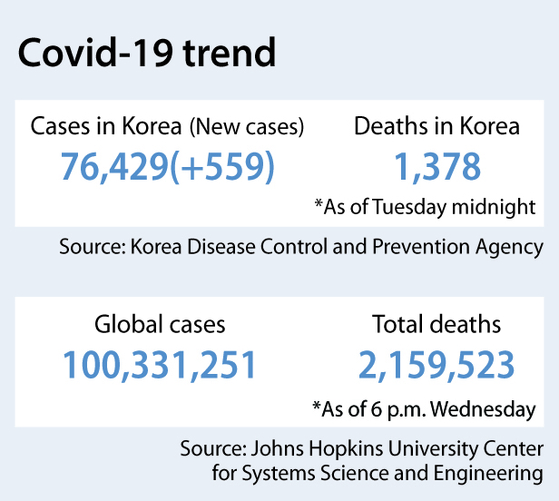 Gwangju Mayor Lee Yong-seop said in a briefing Wednesday that this was the largest cluster of infections ever in the city and said that it will crack down on IM-related cases within Gwangju.

Gwangju saw 112 new cases Wednesday with the missionary school clusters and is not letting down its guard.

The city also ordered all 1,072 child care centers in Gwangju to shut down from Thursday through Feb. 14.

Gwangju residents are also nervous because contact tracing indicated that some of the infected students from the TCS School visited convenience stores, shops and marts, according to Gwangsan District officials.

Three members of a family from Ulsan who visited the Gwangju TCS School from Jan. 17 to 21 — a mother in her 40s and her two daughters — all tested positive. There were eight cases reported in the city of Ulsan Wednesday.

The Ulsan city government likewise ordered testing of any visitors to IM-related schools and churches between Jan. 4 and 26.

Korea reported 559 new cases, of which 516 were domestic infections, as of Tuesday midnight, according to the Korea Disease Control and Prevention Agency (KDCA). This brings total cases to 76,429.

Daily cases were up from 437 on Sunday and 354 on Monday as health authorities have implemented strict social distancing guidelines since last month to quell a third wave of Covid-19 infections.

Health authorities are expected to announce a new social distancing level later this week ahead of the Lunar New Year holiday next month.

Health officials are concerned that the infections related to missionary training schools could lead to major clusters like previous outbreaks in other religious facilities, such as the Shincheonji Church of Jesus and the BTJ Center for All Nations. They are also inspecting any link between the IM cases and the BTJ Center.

The city of Pohang ordered at least one member of each household in the city to get Covid-19 tests through Feb. 3 to promote more proactive testing and prevent local transmissions.