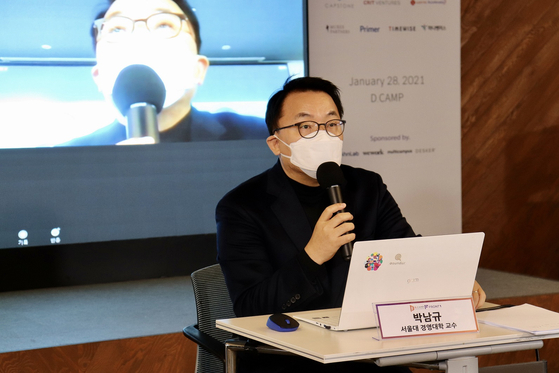 
The Banks Foundation for Young Entrepreneurs helped raise 2.4 trillion won ($2.1 billion) of investment in young businesses and create 32,523 jobs over the past three years.

The figures were part of a study conducted by Prof. Park Nam-gyoo of business at Seoul National University. According to the professor’s study assessing the economic value of the foundation's activities, it generated 6.7 trillion won in economic value over the past three years. During that period, it spent 188.7 billion won donated by Korea’s 19 banks.

The 6.7 trillion won in economic value included analysis of the performance of D.CAMP, the foundation’s start-up support center, in publicizing young start-ups to raise awareness among the public and investors, as well as offering free work space and mentoring programs.

The organization’s monthly D-Day event, for example, provided an opportunity for 418 start-ups to introduce their business. Among its most famous alumni is the fintech app, Toss.

As indirect contribution, Park also studied start-ups that D.CAMP had invested in to see their current valuation and the amount of jobs created.

The Banks Foundation for Young Entrepreneurs operated 25 funds for start-ups worth 10 trillion won, offering early-stage support to companies like Baedal Minjok, Daangn Market and Ohouse, which are now among the most popular IT services in Korea. These funds helped 2,276 companies in total which in turn created 112,639 jobs as of year 2020.

“On the premise that the banks’ funding increases at an average of 20 percent a year, the foundation will be able to infuse 2.6 trillion won in Korea’s start-up ecosystem from 2021 to 2030,” said Park. “That would create an economic value of 40 trillion won, including the effect of bringing about 12.7 trillion won in investments from the private sector and creating 149, 242 jobs.”