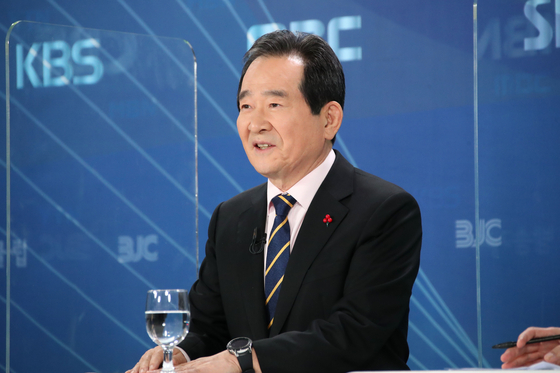 Prime Minister Chung Sye-kyun called for a truce between LG Energy Solution and SK Innovation on Thursday, raising concerns that their prolonged battery brawl is not only hurting the country’s battery business, but that it's also "embarrassing."

“The future of the so-called K-battery industry will be immense, so I hope the two companies stop fighting over small issues but strive toward the global market by resolving the problem pre-emptively,” Chung said in a live televised debate Thursday.

"I have reached out to the top executives at both companies, calling them and meeting them, to urge them to resolve the issue. U.S politicians are also urging for it to be resolved. It's really embarrassing."

Chung said the conflict between the two Korean companies will only benefit others, such as Chinese and Japanese battery makers, which will take this internal conflict as an opportunity to expand their global presence in the fast growing electric vehicle (EV) battery market.

LG Energy Solution and SK Innovation, the two biggest battery makers in Korea, have been engaged in multiple lawsuits in and outside of Korea, but the main conflict stems from LG Chem's claim in April 2019 that SK Innovation stole its trade secrets. That complaint was filed with the U.S. International Trade Commission (ITC) and the U.S. District Court of Delaware.

SK Innovation fought back. The conflict then continued as both companies filed multiple patent litigations against each other.

The conflict between the two companies has become a political issue in the United States as well, as SK Innovation is currently in the process of constructing an EV battery plant in Georgia that is expected to generate 2,600 jobs. SK Innovation pledged to commit more than $2.6 billion to the plant’s construction.

If SK Innovation loses in the final ruling, it might have to withdraw its battery business from the United States, meaning it will have to scrap its investment plan and job promises.

“Although SK Innovation has participated in every stage of the legal process sincerely, I feel sorry to the people of Korea that an agreement couldn’t be made,” Ji said in a statement Thursday.


“I understand the prime minister’s concern is shared by the nation. We will try our best to resolve the issue in a more collaborative and constructive conversation.”

"LG Energy Solution is trying its best regarding the battery lawsuits and will proactively try to settle the issue," the company said in a statement Thursday, issued shortly after SK Innovation's.

"However, SK Innovation's proposals indicate that it doesn't have any will to negotiate. We hope that there will be a proposal soon that is worth considering."