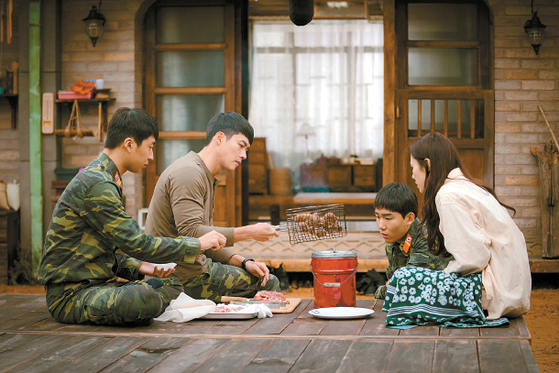 Ri Jung-hyuk (played by Hyun Bin), second from left, grills some meat at the request of Yoon Se-ri (played by Son Ye-jin), far right, in the drama series “Crash Landing on You,” set in a small North Korean village. The drama was chosen as the No. 1 drama by Hallyu consumers of 2020. [TVN]


The consumption of Korean content, especially TV entertainment programs, dramas and games, not only stayed strong amid the Covid-19 pandemic, but actually gained more viewers and users online, the Ministry of Culture, Sports and Tourism said on Thursday.

The Culture Ministry and the Korean Foundation for International Cultural Exchange released the 2021 Hallyu Survey on Thursday, which analyzes the number of Hallyu, or Korean Wave, content users around the world as well as speculates the future expansion of the Korean Wave.

A total of 8,500 Hallyu content users from 18 different countries were surveyed across the fields of television, film, music, animation, games, fashion, beauty, food and publication, carried out by Korea's Research Lab.

Dramas were the most popular Hallyu content, with 29.7 percent of respondents saying they watched Korean dramas. Beauty products and videos came next at 27.5 percent each, followed by variety shows and fashion-related products at 26.9 percent and 24.8 percent, respectively.

Interviewees' favorite drama was "Crash Landing on You," chosen by 9.5 percent of respondents, followed by "It's Okay Not to Be Okay" at 4.1 percent and "The World of the Married" at 2.8 percent.

In the category for singers, BTS topped the chart with 22 percent, followed by Blackpink at 13.5 percent and "Gangnam Style" star Psy at 2.9 percent. The rankings did not change from a year earlier, but the proportion of people who picked BTS and Blackpink as their favorite singers increased on year.


The report, however, showed that those who agreed about their negative sentiments toward Hallyu reached 24.4 percent, down 2.2 percentage points from a year earlier. Some 25.9 percent said they felt Hallyu was too commercial.