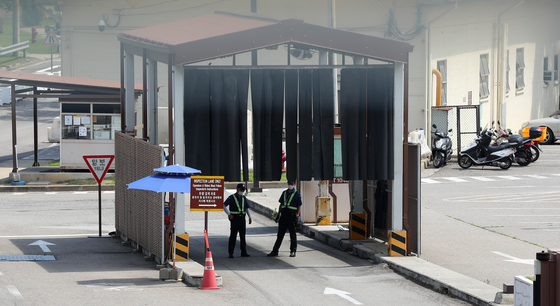 Korean employees of the U.S. Forces Korea begin work at the U.S. military base in Yongsan District, central Seoul, in June, after returning from a 75-day long unpaid furlough. [YONHAP]


The U.S. Forces Korea (USFK) is due to issue notices to its Korean personnel about placing them on a two-month furlough without pay in April.

This would be the second time the USFK employees are held hostage to the year-long stalemate between Seoul and Washington over defense cost-sharing.

According to a USFK source, the command has until today — Jan. 29 — to individually inform Korean workers of the furlough, as per rules that dictate a 60-day advance notice for such cases.

Some 4,000 workers — around half of the USFK’s 8,700 Korean personnel — were placed on furlough for over two months last year due to the allies’ failure to strike a new Special Measures Agreement (SMA) over disagreements about Korea’s contribution for the upkeep of the approximately 28,500 U.S. troops in Korea.

Last June, Washington accepted a proposal from Seoul to provide over $200 million (224 billion won) to fund the wages of all Korean USFK employees through the end of 2020. The arrangement ended the furloughs and allowed the allies to continue negotiations, but has expired with the new year and still no SMA in sight.

The furloughs last year were an unprecedented measure by the USFK that highlighted the allies’ rift over former U.S. President Donald Trump’s demand to hike Seoul’s financial contribution by 50 percent compared to the previous year, to around $1.3 billion.

Korea maintained that a 13 percent increase from the previous year was its best offer. In the 10th SMA signed in February 2019, Seoul agreed to pay around 1.04 trillion won ($871 million), around 8.2 percent more than what it spent the previous year.

But the turnover in the White House earlier this month has generated optimism in Seoul. President Joe Biden’s new secretary of defense, Lloyd Austin, said in a written statement he would seek an early conclusion to the SMA negotiations in order to shore up the alliance with South Korea.

In the meantime, Seoul has already proposed funding the wages of USFK Korean employees, similar to last year. Should the offer be accepted, furloughs may not be issued at all in April.

Questions still linger over how quickly the Biden administration can continue SMA negotiations, particularly in the off chance it chooses to overhaul the negotiation team set up at the end of the Trump administration.

“At present, it is hard to know whether SMA talks are a priority for the Biden administration, given the myriad of challenges it is facing domestically,” said one Korean government official requesting anonymity.

Difficulties faced by the USFK currently amid a continuing string of Covid-19 outbreaks in U.S. bases in Korea also pose problems. Furloughs for Korean workers, who perform auxiliary tasks for the command, may aggravate conditions and hinder regular operations for American troops.

The Korean official noted the USFK’s stance could sway opinions in Washington toward accepting Seoul’s interim proposal in line with last year’s precedent.

“Labor costs must not be further held hostage to the SMA negotiations.”