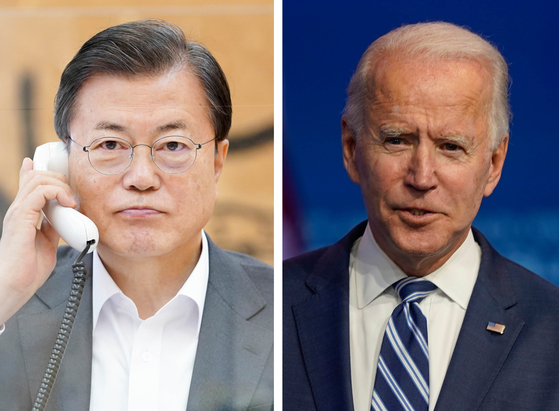 
After U.S. President Joe Biden talked on the phone with Japan's leader early Thursday morning, the Blue House struggled to say when President Moon Jae-in will get phone time with the new American president — and if there is any particular reason for the delay.

Biden had his first phone conversation with Japanese Prime Minister Yoshihide Suga for about 30 minutes shortly after midnight Tokyo time. Suga was the first Asian leader to chat with Biden since he took office on Jan. 20.

According to the White House, regional security issues including China and North Korea were among the topics discussed. “They together affirmed the necessity of complete denuclearization of the Korean Peninsula, and the early resolution of the [North Korean] abductions issue,” the White House said.

After the call, Suga held a late-night briefing for reporters. “I want to deepen my personal relationship with President Biden and cooperate with him to strengthen the Japan-U.S. alliance,” Suga told them. 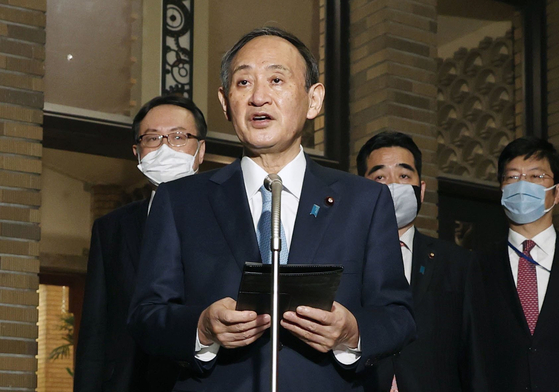 Japan's Prime Minister Yoshihide Suga speaks to the press after having his first phone talk with U.S. President Joe Biden on Thursday. [YONHAP]


Throughout Thursday, the Blue House faced a barrage of questions about when Moon will have a phone call with Biden. “The two sides are currently discussing a schedule,” said a senior presidential aide.

Another presidential source said no schedule has been fixed, but the two men will talk soon.

“The phone calls are taking place in an order decided by the White House based on diplomatic traditions,” the source said. “There is no need to attach significant meaning to the order.”

Korean media have a history of fanning the rivalry between Seoul and Tokyo over calls from a new U.S. president, although the Washington tradition is for a call to Tokyo first, followed by one to the Blue House.

“You have to consider the time difference when the presidents have phone conversations,” the Blue House source said. “The Biden-Suga call took place at an extraordinary time, an extremely early morning hour in Japan. Biden probably has many domestic tasks to handle, and that must have affected his diplomatic schedule.”

Over the past years, phone calls between a U.S. president and his Korean or Japanese counterpart usually occurred around 9 a.m. or 9 p.m. in Korea or Japan. On Nov. 12, when Biden was president-elect, he had a phone call with Suga at 8:30 a.m. and with Moon at 9 p.m.

After his inauguration, Biden started a series of diplomatic calls. Starting with the Canadian prime minister on Jan. 22, he talked to the leaders of England, France and Germany, in that order, on the following days. He had a phone call with the NATO secretary-general and Russian President Vladimir Putin this Tuesday, Washington time, and with Suga the next day.
After he was inaugurated, Donald Trump had a phone conversation with Japanese leader Shinzo Abe on Jan. 28, 2017. At the time, Korea's leader was Acting President Hwang Kyo-ahn and their phone call took place the next day.

In 2009, President Barack Obama also talked to the leader of Japan before he talked to Korea's. Obama’s phone call with President Lee Myung-bak took place five days after his call with Japanese Prime Minister Taro Aso.

“Biden and Moon will soon have their call, but we have to pay attention to the timing and the order,” said a former diplomat. “The new U.S. administration already warned China against any expansionist intentions. I think Moon should have been more careful about having his latest phone call with Chinese President Xi Jinping.”

Moon and Xi spoke on the phone Tuesday night, which the South China Morning Post described as part of Beijing’s “charm offensive” to thwart plans by the Biden administration to engage Seoul in an anti-China alliance of democracies.

The Blue House dismissed that political interpretation, stressing that the call was meant merely to exchange New Year’s greetings.

Korea’s foreign and national security officials are also having phone conversations with their new counterparts, but again, after the Japanese go first. White House National Security Advisor Jake Sullivan had a phone call with his Japanese counterpart Shigeru Kitamura on Jan. 21 and his Korean counterpart Suh Hoon two days later.

Secretary of State Antony Blinken talked with the foreign ministers of Korea and Japan on Wednesday, but the call to his Japanese counterpart, Toshimitsu Motegi, came before Korea’s outgoing Foreign Minister Kang Kyung-wha.