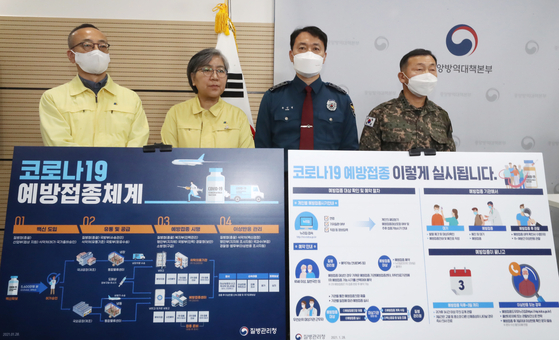 Jeong Eun-kyeong, the commissioner of the Korea Disease Control and Prevention Agency (KDCA), second from left, explains Korea’s vaccination scheme, alongside other government officials in a briefing Thursday at the KDCA headquarters in Cheongju, North Chungcheong. [NEW1]


Free Covid-19 vaccinations in Korea will be available to frontline medical workers starting next month, health authorities announced Thursday, while inoculation of the general public will take place in the latter half of this year.

The Korea Disease Control and Prevention Agency (KDCA) revealed its detailed coronavirus vaccination plans, dividing inoculation into four phases prioritizing shots to medical workers, the elderly and the highly vulnerable population in the first half of the year.

In the first quarter of the year, some 50,000 medical professionals treating Covid-19 patients at hospitals and treatment centers in the greater Seoul area are supposed to receive their first doses, starting in February. They will be followed by another 780,000 patients and staff at elderly care facilities.

In the second quarter, starting in May, some 8.5 million people aged 65 and above will be vaccinated, along with an estimated 900,000 residents of facilities for the disabled and elderly welfare centers. Some 380,000 health care workers, including those at local clinics, and pharmacists are also included in this second phase, which is expected to inoculate a total of 9.4 million people.

In the third quarter, between July and September, the general public between ages 19 and 64 will be eligible to receive vaccinations.

In the fourth quarter, people who missed out on getting vaccinated previously or need to get their second shots will be inoculated.

Pregnant women and children under the age of 19 are excluded from the vaccination scheme for the time being as authorities continue to monitor possible side effects in these groups.

Jeong Eun-kyeong, commissioner of the KDCA, the agency in charge of the vaccination process, in a briefing said that the scheme should minimize the number of deaths, prevent the spread of infections in the local community and maintain the current public health care system.

The KDCA earlier said it aims to vaccinate 70 percent of the population by September and achieve herd immunity by November.

The government said it has sourced enough Covid-19 vaccines to inoculate 56 million people through contracts with several global pharmaceutical companies and through the World Health Organization's Covax Facility initiative.

Health officials said that 1.5 million out of 10 million doses of the AstraZeneca vaccines are expected to be the first batch to reach Korea in late February.

Another six million vaccines from Johnson & Johnson's Janssen and Moderna vaccines for 20 million people are set to arrive in the third quarter.

The Pfizer vaccine will be available in the third quarter, though a certain portion could be provided earlier.

The KDCA is also near sealing a deal with U.S. drug manufacturer Novavax to source vaccines for another 20 million people.

The Pfizer and Moderna vaccines will be administered at state-run vaccination facilities as they require ultra-cold chain storage.

All the vaccines require two doses except the Janssen vaccine, which is a single shot.

The KDCA said that people will be able to access information on the vaccination process starting Feb. 1 online at http://ncv.kdca.go.kr, and the website is expected to offer vaccine appointments starting in March.

The process to get free Covid-19 vaccines may start off with a text message or phone call from officials to those who are eligible.

Vaccines are expected to be administered at 250 designated centers nationwide that will have cold chain storage capabilities for mRNA vaccines, such as those produced by Moderna and Pfizer, and at some 10,000 hospitals and medical clinics for the other vaccines.

The government promised compensation if there are confirmed abnormal side effects from any Covid-19 vaccination. 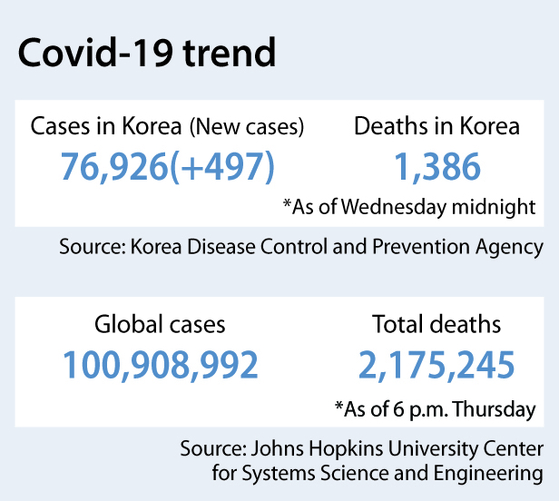 As the country mulls an adjustment to its current social distancing regimen, Korea reported 497 new Covid-19 cases, of which 479 were domestic infections, as of Wednesday midnight, according to the KDCA Thursday, raising total cases to 76,926.

Daily cases were down slightly from 559 the previous day, but remain high amid a series of infections related to missionary training schools throughout the country.

Of the local transmissions, 102 were in Seoul, 116 in Gyeonggi and 40 in Incheon. Gwangju reported 44 cases, while 43 cases were found in North Gyeongsang and four in Daejeon.

A total of 153 cases in Gwangju are linked to the International Mission (IM), a Korea-based missionary society that runs over two dozen church-related educational facilities across the country, said the KDCA Thursday.

The Gwangju Ace International School in Buk District reported 15 cases, with 10 additional cases related to a church in the same building and 14 infections related to an affiliated child care center.

The International Education Mission School in Daejeon, also owned by IM, led to a total of 176 infections.

The missionary schools are not authorized by the government and were reported to have not followed proper social distancing guidelines with boarding students living in closed quarters and not wearing masks in classes.

A total of 340 cases are related to six of IM’s schools and churches in Gwangju, Daejeon, Ulsan, Gyeonggi and South Gyeongsang, said health authorities, after testing 1,954 people at 40 IM-related educational facilities across the country.

There were 18 imported cases, down from 43 the previous day, including seven visitors from the United States, three from Hungary and two from Japan.