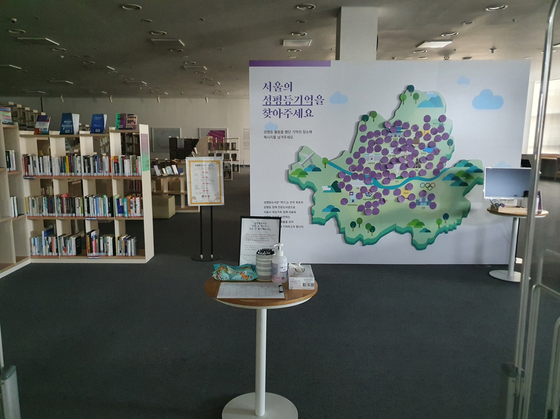 The Gender Library in Dongjak District, southern Seoul, was established in 2015 as the first library in Korea dedicated to collections and publications on gender equality. Established by the city government of Seoul, it is managed by the Seoul Foundation of Women and Family. [LEE GA-RAM]


The Gender Library in Seoul is facing an unexpected quandary after the National Human Rights Commission of Korea announced earlier this week that former Seoul Mayor Park Won-soon sexually harassed his secretary.


The library, which is dedicated to archiving records and data on gender equality, was established in Dongjak District, southern Seoul, by the Seoul city government and Seoul Foundation of Women and Family in 2015, while Park was the mayor of Seoul. It was the first library in Korea dedicated to gender equality.

It holds thousands of books on the topic of gender equality, along with reports, white papers and other related data released by dozens of organizations on gender equality in Korea, as well as by the local government offices.

They include 965 records donated by Park, including those on one of the earliest sexual harassment cases in Korea that Park once handled when he was a lawyer.

Park defended the case of a woman named Kwon In-sook in 1985, who was sexually abused by a police officer named Moon Gui-dong while she was held in custody at the Bucheon Police Precinct in Gyeonggi. Kwon went on to win the case.

Park, in his speech at the opening ceremony of the library in 2015, pointed out that “much more work needs to be done” to address gender inequality in the workplace.

The National Human Rights Commission of Korea concluded its six months of investigation on Monday on the allegation that Park sexually harassed his former secretary for years. While the commission holds no authority to press criminal charges, it said evidence was found to support the allegation.

Park’s former secretary filed a complaint to the police on Park on July 8, 2020, claiming Park sexually harassed her for years. Park went missing the next day and was found dead on July 10 near a trail on Mount Bugak in Seoul. The police concluded he committed suicide.

By law, any investigation into Park's misbehavior was closed due to the death of the suspect.

Some experts are calling on the library to add to its existing resources the records on Park’s sexual harassment scandal.

“The library was created to collect information and records on gender equality in Korea, to show over time how the country and its people as a whole have or not have evolved to become more gender-aware,” said Han Mi-kyung, head of a civic group on the protection of women’s rights.

“I think it’s only right for the library to keep the records on Park’s strides toward gender equality as well as the records showing that he behaved as a perpetrator in a sexual harassment case.”

If the information about Park’s sexual harassment scandal is not included in the library, it ought to dispose of the records donated by Park, said Shin Ji-ye, head of another civic group supporting women’s rights.

“The scandal and how it was accepted by the public is an important record of Korea’s history on gender equality,” Shin said. “If the library cannot add these new records, it shouldn’t be keeping the old ones, praising Park’s work on gender equality.”

The Seoul Foundation of Women and Family, which manages the library, said it will be keeping the old record on Park for now.

“The library’s decisions to keep or dispose of records and publications are not based on who donated or wrote them, but rather on their value in contribution to society,” an employee at the foundation said, adding that it will be holding internal meetings to determine what to do with the old records donated by Park.