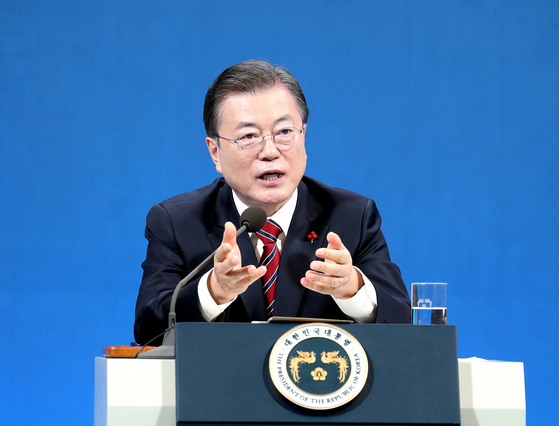 YOO JEE-HYE
The author is the head of the diplomatic andsecurity news team of the JoongAng Ilbo.


President Moon Jae-in’s changed stance on Japan as shown at the New Year’s press conference on Jan. 18 was surprising. At a cabinet meeting in August 2019, he vowed Korea would never be defeated by Japan again. But only a year and a half later, the hard-line position turned into an olive branch. “The history is past, and future-oriented development needs to be pursued,” he said.

The Moon administration’s will to improve Korea-Japan relations is clear. The Biden administration has begun, and the Korean government can use the Tokyo Olympics as a chance to resume South-North-U.S. talks. But the sudden shift makes Japan puzzled. A Japanese source asked me why Korea was doing this to Japan.

President Moon said that the 2015 “comfort women” agreement was an official government agreement, pointing to the need to find solutions based on the agreement. But many people were reminded of the verification of the Kono Statement by the Abe government in 2014. Japan verified the process of the 1993 Kono Statement — which first recognized military involvement in wartime sex slavery — and dismissed it as a “product of a political deal” between Seoul and Tokyo rather than a “sincere apology” from Japan. The Abe administration concluded that it would succeed the Kono Statement. Korean Foreign Ministry officials found it fortunate that the statement would be continued but had bitter feelings.

The Moon administration reviewed the comfort women agreement and although they found major flaws, concluded that a renegotiation would not be pursued. And yet, the government suspended the 1 billion yen ($9.6 million) that Japan paid, practically disabling the agreement.

Fortunately, the two countries have a history of success despite countless obstacles. The Kim Dae-jung-Obuchi Declaration of 1998 is one of them. What’s as important as then-Japanese Prime Minister Obuchi’s apology on colonial rule is that President Kim accepted it and recognized Japan’s post-war efforts to restore peace.

What needs to be taken into consideration before trying to rebuild relations with Japan is a mutual respect for each other. If the Moon administration doesn’t keep this in mind, its attempt at reconstruction of bilateral relations will be botched no matter how hard it tries.