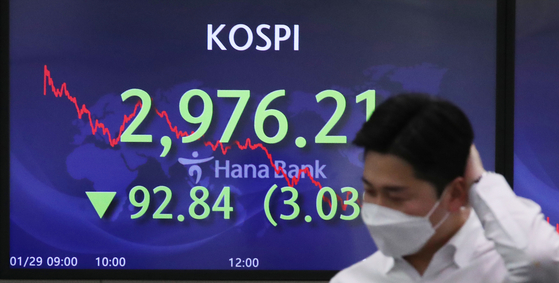 
Stocks plunged below the 3,000-point threshold Friday on massive foreign dumping, largely generated by valuation concerns over local stocks and a liquidity squeeze in China. The won rose against the dollar.

The Kospi kicked off with mild gains after losing 4.4 percent in the past three sessions but then fell due to increased institutional and foreign selling.

"The U.S. Federal Reserve seems to have failed in delivering a clear [fiscal] signal to the stock markets, while investors are worried that China's People's Bank of China is giving a tapering signal," Hana Financial Investment analyst Lee Jae-sun said.

"Large caps made far more gains in Korea compared with their global peers, including those of the emerging markets, and therefore came under stronger price adjustment," he added.

The local currency closed at 1,118.8 won against the dollar, down 0.8 won from the previous session's close.