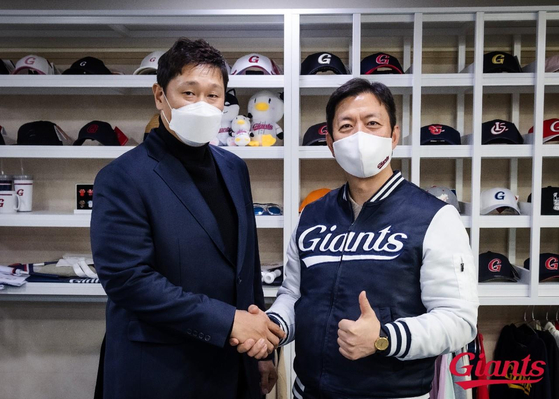 Lee Dae-ho, left, poses for a photo after re-signing with the Lotte Giants. [YONHAP]


The Lotte Giants have re-signed veteran slugger and former captain Lee Dae-ho on a two-year deal, ensuring that the franchise star finishes his career with the Busan club.

The Giants announced Thursday that they re-signed free agent Lee on a two-year contract for a total 2.6 billion won ($2.3 million) including an 800-million-won signing bonus, 800 million won in annual salary and a winning option of 100 million won each year.

The deal means that Lee, currently 38 years old, will continue playing in the KBO until he is 40, when he says he plans to retire.

Lee joined Lotte in the first round of the draft in 2001. He played for the club for 10 years until the 2011 season, when he moved to Japan to play for the Orix Buffaloes and Fukuoka SoftBank Hawks. In 2016, Lee signed a minor league contract with the Seattle Mariners, but was quickly moved up to the major league team.

Lee appeared in 104 games with the Mariners and hit 14 home runs, including a homer for his first-ever MLB hit.

Lee returned to the KBO in 2017, signing the largest free agent deal in the league's history at the time with the Lotte Giants.