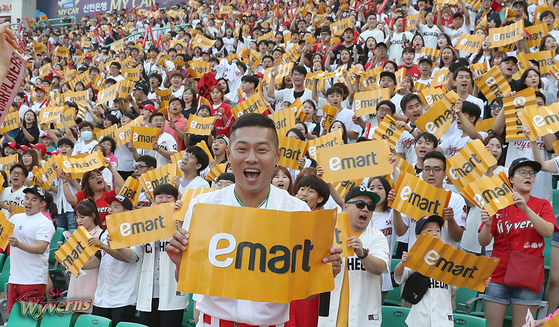 An SK Wyverns cheerleader holds an Emart sign during a collaboration event on July 13, 2019. [SK WYVERNS]


Shinsegae Group last week announced that it would buy the SK Wyverns baseball club from SK Telecom for 135.2 billion won ($122 million), with Emart to take over the team's management. The group will pay 100 billion won for a 100-percent stake in the club and 35.2 billion won for facilities and properties.

The immediate response was mixed, with some retail investors speculating that the decision was based on Chung’s personal interest.

It certainly wasn't a business move based on profitability. Baseball teams are not designed to make money, and the SK Wyverns reported 860 million won in net loss with 56.2 billion won in revenue in 2019.

But experts generally agree Emart had good reasons to acquire the baseball club, considering its goal to integrate online and offline businesses and changing retail trends that have evolved from just being a provider of necessities to entertainment content.

The acquisition was also clearly not a sudden decision.

At the opening ceremony of Shinsegae Group’s shopping complex Starfield in Hanam, Gyeonggi, in 2016, Chung said retailers will be competing against theme parks or baseball stadiums. In his New Year’s speech in January, he stressed that “the market competition will rapidly restructure,” adding that the group won’t miss “an optimal opportunity” to become a market leader. 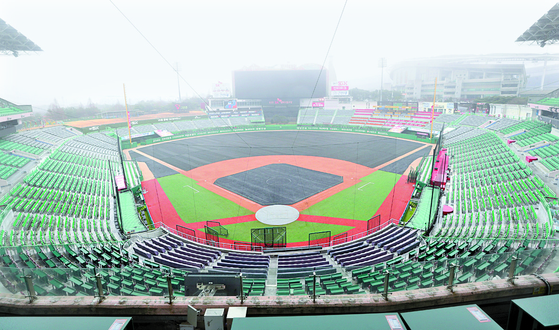 As more people shop online, offline markets have been struggling to find ways to recover customers by providing entertainment content. Emart’s Electro Mart, an electronics chain, and Starfield shopping complexes are examples of its effort to pull in customers that increasingly prefer to shop online.

Through the acquisition of a baseball club, Emart gets to provide another type of entertainment to potential customers.

“As retail business moves online, retailers are losing the contact point to interact with customers face to face,” said Professor Lim Chae-un, who teaches marketing at Sogang University. “Emart will likely use the baseball club as that contact point.”

Emart’s plan is to “evolve the baseball stadium into a lifestyle center,” where “spectators can enjoy various Shinsegae Group services in one spot,” the company said. It also plans to build a dome that can be used for numerous purposes.

Emart chose baseball because it has a large fan base in Korea.

“Baseball fans are usually very passionate, and a lot of them form communities online and offline,” said Jeong Sang-hwan, a spokesperson for Shinsegae Group. “Those internet-savvy enthusiasts overlap with our main customers.”

Jeong added they are potential customers of SSG.com and could also develop into “Shinsegae [Group] fans.”

Emart said it will develop various categories of products, including groceries, daily necessities and pet items, that are inspired by baseball.

Another benefit of the acquisition is that it helps keeps Emart in touch with the latest trends.

“Thousands of young people in their 20s and 30s gather at baseball games,” said Park Ki-soo, a professor in the department of digital culture ahd content at Hanyang University. “This will enable Emart to quickly catch the latest trends through analysis” of their behavior, like what they eat or how they dress for games.

Around eight million people visit professional baseball games annually, according to data from the KBO.

Emart will also be able to effectively promote their brands or products to young potential customers that will grow to become major consumers in the near future at one spot.

The fact that the baseball club is based in Incheon could also help Emart stay trendy because it is in a metropolitan area near Seoul, where trends usually start.

“Many of the spectators of games held in Incheon will be people from Seoul, who are trendsetters,” Prof. Park added.

Incheon is also a good location for Shinsegae Group because people are familiar with the brand, as it operated Shinsegae Department Store from 1997 through 2018. Lotte now operates a department store at the same spot.

“Incheon people seem to have familiarity toward Shinsegae because it operated a department store there for a long time,” said Ha Min-ji, a spokesperson for Lotte Corporation. “Local people naturally feel a connection with the brand of the team that is based in their city.”

“Incheon is an area where Shinsegae Group plans to expand its businesses,” said Yoon Tae-min, a spokesperson for Emart. “The opening of Starfield in Cheongna, [Incheon], is an example of that expansion.”

Construction of the shopping complex is scheduled to be completed in 2024.

The Emart-run baseball club will be launched in March with a new name, emblem and character. The deal will be finalized on Feb. 23.