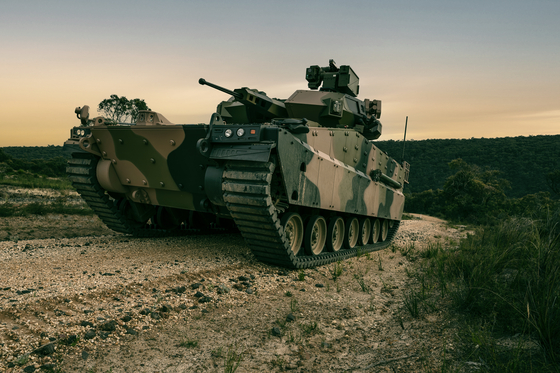 The AS-21 Redback, an infantry fighting vehicle developed by Hanwha Defense, is one of two final bids for the Australian Army's Land 400 Phase 3 Project. The vehicle was revealed in Australia for the first time on Jan. 12, and will undergo evaluation tests starting February. [HANWHA DEFENSE]


The AS-21 Redback, developed by Korean arms maker Hanwha Defense, will begin evaluation trials starting February to win a tender to build infantry fighting vehicles (IFV) for the Australian Army.

Modeled after the Korean Army’s K-21 IFV, the Redback was officially launched in January by Hanwha before three of its models were due to be delivered to the Australian Army for testing on Jan. 13.

The vehicle was selected as a finalist in Canberra’s $18 billion to $27 billion Land 400 Phase 3 project, which will overhaul Australia’s current fleet of M113AS4 armored personnel carriers and replace them with around 450 units of a new IFV. The Redback, named after a venomous Australian spider, is competing with German company Rheinmetall’s Lynx KF41 to win the bid.

The evaluation trials are part of a risk mitigation activity that will be carried out until October 2021, which will test the Redback and its competitor on their performance, firepower, defensive capabilities, mobility and support, among other factors. The tests will inform the Australian government’s decision to select a preferred tenderer in 2022.

The Redback is a fifth-generation IFV equipped with a Mk44S Bushmaster II 30-millimeter caliber automatic cannon as its main armament, which can be upgraded to a 40-millimeter variant if necessary. The vehicle also has a 7.62 millimeter coaxially mounted machine gun.

Around 20 to 30 percent of the technology and equipment on the Redback is Israeli, Hanwha said. The vehicle is protected by armor made by Plasan, an Israeli vehicle manufacturer, and has blast mitigation systems to protect against mines and improvised explosive devices.

Another Israeli company, Elbit Systems, provided the vehicle with its Iron Vision system, which provides the Redback’s crew with 360-degree situational awareness through a head mounted display.

Hanwha Defense Australia, a subsidiary of the Korean firm based in Melbourne, has teamed up with other arms companies including Electro Optic Systems and Elbit Systems to produce the Redback.

“The Redback would represent a huge step forward for the Australia Defence Force in terms of its capability to deliver land forces safely and effectively in very high threat scenarios,” said Richard Cho, managing director of Hanwha Defense Australia.

“Local production of the Redback by Hanwha Defense Australia also represents a significant opportunity for the Australian industry and could become the cornerstone of advanced manufacturing and technology transfer between the Republic of Korea [ROK] and Australia.”

The vehicles will be produced locally at the company’s factories in Australia’s Geelong region. According to Hanwha, purpose-built facilities in the region will also be used to manufacture the Redbacks, should the vehicle be selected for Land 400 Phase 3.

A PricewaterhouseCoopers report commissioned by the company estimated the production of Redbacks will generate around $9 billion for Australia.

Australia, a key member of the U.S.-led Indo-Pacific strategy, has been rapidly expanding its defensive capabilities in response to China’s growing clout in the region.

Hanwha Redback goes through its paces before press

This K-9 is all bite