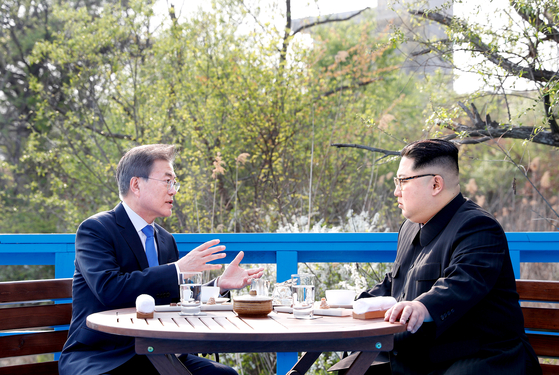 
The main opposition People Power Party (PPP) Sunday urged a special probe into allegations that the South Korean government drafted a secret plan in 2018 to build a nuclear power plant in North Korea.

Controversy has arisen with reports that documents detailing a plan to build a nuclear power plant in North Korea were included in 530 files Ministry of Trade, Industry and Energy officials deleted as the Moon Jae-in administration pushed the phasing-out of nuclear power in the South.

Since last year, the Daejeon District Prosecutors’ Office has been investigating an allegation that the Energy Ministry obstructed a Board of Audit and Inspection audit in 2019 of the Moon government’s controversial decision to shut down the country’s second-oldest nuclear reactor, Wolsong-1, earlier than scheduled. Following the probe, three ministry officials were indicted on Dec. 23 on charges of deleting massive amounts of ministry data right before the audit.

The PPP leadership held an emergency meeting to discuss the nuclear power plant allegations at the National Assembly Sunday and urged the Blue House to reveal the truth.

“If the government does not reveal the truth," said Kim Chong-in, the acting leader of the PPP, during the meeting, “it will be inevitable that the National Assembly will have to push for a parliamentary inspection.”

Kim demanded to see the originals of the deleted files and for a fact-finding committee to be launched should the government not comply.

Kim also urged the Blue House to reveal what transpired during one-on-one talks between President Moon Jae-in and North Korean leader Kim Jong-un at the inter-Korean summit on April 27, 2018 — specifically as they chatted as they crossed a pedestrian bridge — and whether the nuclear power plant construction plan was included in a video presentation for Kim.

He raised concerns that South Korea building a nuclear power plant for the North could violate United Nations Security Council resolutions and make Seoul a target of secondary sanctions.

Joo Ho-young, the floor leader of the PPP, urged in a Facebook post Sunday that President Moon address the North Korea nuclear power plant allegation, adding that if such an explanation is not made, “the truth must be revealed through a special probe and a parliamentary inspection.”

Among the 530 documents deleted in December 2019, restored by prosecution, there were reportedly 17 files concerning North Korea created in 2018. Those documents were stored inside a folder entitled “60 pohjois.” Pohjois is a Finnish world for North.

One file dated May 2, 2018, had the title “Experts in inter-Korean economic cooperation in the energy field," according to a list obtained by the JoongAng Ilbo Thursday of the files. Two files dated May 14 and 15, 2018, were both entitled “Plan to build nuclear plant in North Korea.” Other files included “North Korea’s electricity industry report and the case study of Germany” and “Step-by-step tasks for cooperation to build electricity infrastructure in North Korea.”

The files were mainly created after Moon’s first summit with North Korean leader Kim on April 27, 2018, in Panmunjom, the inter-Korean truce village.

During the summit, Moon handed Kim Jong-un a blueprint for a "new economy on the Korean Peninsula." Moon confirmed he handed a booklet and video presentation to Kim during a senior presidential secretariat meeting he hosted three days after the summit. Moon reportedly gave a digital file of the presentation on a USB drive to Kim.

When Moon and Kim had a one-on-one chat on the pedestrian bridge inside Panmunjom during their first summit, Moon was caught on a TV camera from a distance appearing to say “power plant issue” to Kim. That fueled speculation that the two leaders discussed energy issues in the North.

“The administration is shutting down nuclear plants in the South, while secretly planning to build a nuclear plant in the North,” the PPP’s Kim Chong-in said Friday in a strongly-worded statement. “This is a shocking act abetting the enemy that can shake up the fate of the government.”

Kim urged the prosecution to investigate the discovery, claiming that higher officials of the administration must have ordered the ministry to destroy files en masse to cover up the North Korea project.

The Blue House, former presidential aides and the ruling Democratic Party immediately shot back at the allegations.

A Blue house spokesman accused the PPP’s Kim of making “irresponsible” remarks to sway voters ahead of April by-elections.

“Kim claimed that the administration made a secret promise to the North to build a nuclear plant,” Kang Min-seok, the presidential spokesman, said Friday evening. “He even said the government acted to abet the enemy. This is groundless.”

He added, “The government will strongly counter his remarks, including with a libel suit.”

In a Facebook post Sunday, Cho wrote, "Of course it is a lie, a malicious distortion that implies that the two leaders would have made an under-the-table deal."

Cho noted that he, as protocol secretary, along with his North Korean counterpart Kim Chang-son, chief secretary of the Secretariat of the State Affairs Commission, had been on-site at the time, adding, “It is astounding that a scene that was broadcasted live globally could be distorted like this.”

DP Rep. Youn Kun-young, a first-term lawmaker and Moon’s chief of the state affairs planning and monitoring office of the Blue House in 2018, likewise rebutted the allegations in a Facebook post Friday and wrote, “A plan to construct a nuclear power plant for North Korea was not included in any of the cooperation ideas proposed during the three inter-Korean summits during the Moon Jae-in government.”

Officials at the Ministry of Trade, Industry and Energy said that they were baffled by the discovery that plans concerning the construction of a nuclear plant in the North were among the files deleted before the audit, which is likely to have diplomatic repercussions.

PPP lawmakers on the parliamentary Trade, Industry and Energy Committee issued a joint statement demanding an apology from the Moon administration Sunday, stating that if the allegations are true that the government “had been making a nuclear power plant transaction with the North,” it would have been “a deception of the public while begging for peace with the North.” 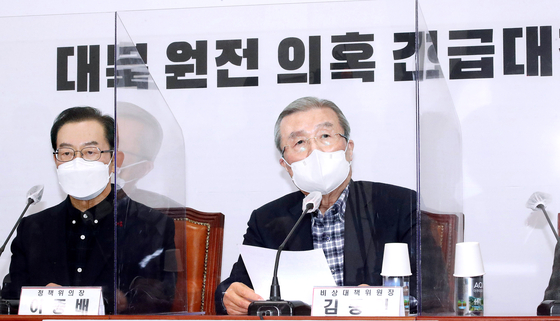 Kim Chong-in, right, the acting chief of the People Power Party, holds a meeting on the allegations that the South Korean government drafted a secret plan in 2018 to build a nuclear power plant in North Korea at the National Assembly in western Seoul Sunday. [OH JONG-TAEK]