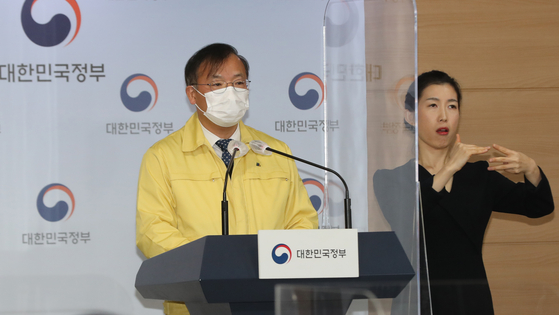 Vice Health Minister Kang Do-tae announces that the current social distancing scheme will be extended for another two weeks, through the Lunar New Year holiday, in a press briefing at the government complex in central Seoul Sunday. [YONHAP]

Current social distancing regulations, including a ban on gatherings of five or more people, are extended for another two weeks as a precaution ahead of the Lunar New Year holiday.

The country will maintain the Level 2.5 measures, the second-highest in its five-tier scheme, in the greater Seoul area and Level 2 in other regions, through Feb. 14.

The extension of regulations in place since Dec. 8 reflects concerns that infections could spike if people travel to their hometowns for the Lunar New Year holiday, which runs from Feb. 11 to 14.

“We cannot let down our guard right now,” said Vice Health Minister Kang Do-tae in a press briefing at the government complex in central Seoul Sunday. “There is a high possibility that travel to other regions and gatherings will increase during the Lunar New Year holiday, thus there is a risk that the third wave will rapidly spread.”

Kang noted that the daily average of Covid-19 infections in the past week was 418, higher than the 365 of the previous week.

Worries over missionary training school clusters led to a postponement of the announcement of the government’s plans, which was expected last week.

The government had considered downgrading the social distancing measures as cases dropped into the 300 to 400 range.

But then came the cluster of infections at schools run by International Mission (IM), a Korea-based missionary society with at least two dozen church-related schools and facilities across the country including the International Education Mission (IEM) School in Daejeon and two TCS International Schools in Gwangju. These schools are not officially authorized by the government.

Under Level 2.5 measures in the greater Seoul area, weddings, funerals and other large gatherings have to be kept under 50 people while religious services have to keep below 10 percent capacity. Restaurants and cafes in the Seoul metropolitan area are only allowed to offer take-out and delivery services after 9 p.m.

Under Level 2.5, bars, clubs and other nighttime entertainment high-risk facilities will remain shut for another two weeks. Other facilities considered risky including theaters, PC rooms, arcades, private academies, department stores and marts will have to close at 9 p.m.

A few measures that were specifically strengthened in the winter season will be eased, such as banning operations at ski resorts after 9 p.m.

The Korean government earlier this week revealed its free vaccination plan, which is expected to kick off with inoculation of front-line medical workers in late February. The country aims to vaccinate 70 percent of the population by September and achieve herd immunity by November.

Chung on Sunday revealed Korea will get enough Pfizer vaccines for nearly 60,000 people, or 117,000 doses, as early as mid-February.

Korea will also get AstraZeneca vaccines for up to 2.19 million people in the first half of this year, he added. At least 300,000 vaccines are expected to arrive between February and March.

The government has so far sourced enough Covid-19 vaccines to inoculate 56 million people.

It plans to carry out a nationwide mock training session for Covid-19 vaccinations between Monday and Wednesday, including practicing transferring vaccines that need cold chain storage.

Korea reported 355 new Covid-19 cases as of Saturday midnight, according to the Korea Disease Control and Prevention Agency (KDCA), bringing total infections to 78,205. 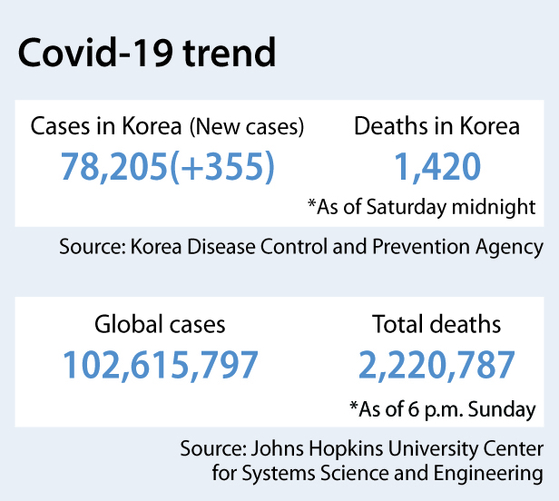 This was a drop from the previous five days, with 559 on Monday, 497 on Tuesday, 469 on Wednesday, 497 on Thursday and 458 on Friday, but authorities point out there is less testing over the weekend.

Of the 355 cases, 325 were local infections — 98 were in Seoul, 107 in Gyeonggi and 19 in Incheon, said the KDCA. Infections outside the Seoul metropolitan area included 20 in Busan, 16 in Gwangju and 18 in South Gyeongsang.

The first patient was reported on Wednesday, a family member of an in-patient in the 15th floor neurosurgery department who had begun showing Covid-19 symptoms the day before and gotten tested.

Infections linked to homeless shelters, including those near Seoul Station in central Seoul, also added four new patients, bringing related cases to 46 as of Sunday.

The 30 imported cases included eight from the United States, four from Mexico, three from Japan and one from Brazil.