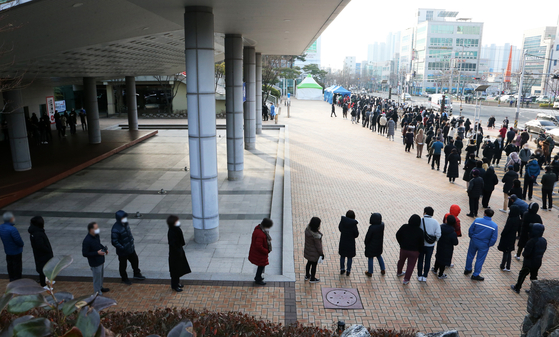 Pohang residents line up to be tested in front of the City Hall on Jan. 27, after the city government issued a directive ordering at least one person per household to be tested by Feb. 4. [YONHAP]

The Pohang city government issued a directive on Jan. 25 that one person from every household must be tested for Covid-19 as a preventive measure. The deadline for the 175,133 households in the city is Feb. 4.

Any household that fails to have a member tested can be charged with violating the Infectious Disease Control and Prevention Act and fined up to 2 million won ($1,790), the city government said. If anyone living in Pohang tests positive for Covid-19 in the future after their family ignored the testing directive, they will be responsible for all the costs involved with their quarantine and that of their family members.

“The directive was issued because of rising concerns about cases stemming from a missionary school in Sangju [in North Gyeongsang] and [its operator] InterCP International, which has led to an increasing number of Covid-19 infections in the area,” the city government said in a statement.

Pohang is less than 100 miles from Sangju.

Sangju was a hotspot for coronavirus infections in January after a cluster emerged from the BTJ School in Sangju, a missionary training school. That cluster totaled 808 cases as of Saturday.

Many of the infected attended large gatherings at the school from October to December while Korea’s third wave was picking up steam.

The Daegu city government ordered all 556 people who visited noraebang (singing rooms) and bars in the city from Dec. 25 to Jan. 20 to be tested by Jan. 31 or face criminal charges after a noraebang employee tested positive on Jan. 21. It also shut down all noraebangs in the city for ten days.

The city government had the contact information of the 556 people, because they registered when entering the noraebangs and bars.

All underwent the mandatory testing and one tested positive, according to the city government. 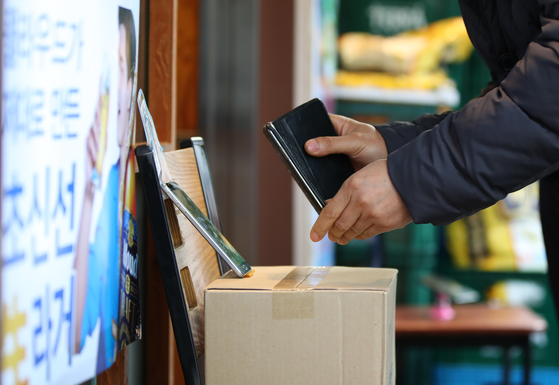 A visitor to a restaurant in Seoul on Nov. 25 registers his contact information at the entrance of the restaurant by scanning a QR code. [YONHAP]

The Suncheon city government in South Jeolla banned people from drinking in restaurants from 5 a.m. to 4 p.m. from Jan. 4 to Jan. 11 in the name of Covid-19 prevention measures.

Some rights groups have criticized these measures as an abuse of power by local governments.

“The people have been cooperative so far in following the government’s social distancing recommendations in a voluntary manner,” reads a statement issued by an association of civic groups in Korea including Solidarity on Human Rights and the National Council of Churches in Korea’s Daegu branch office on Wednesday.

“These types of directives issued by the local governments can have heavy consequences on the livelihoods of the residents. The local governments shouldn’t be allowed to infringe on the basic rights of citizens protected by the Constitution simply in the name of governance.”

Get to the bottom of the favoritism