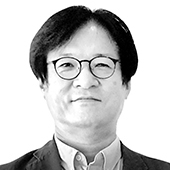 The author is a political science professor at Chung-Ang University and a columnist for the JoongAng Ilbo.


The curtains have come down on the crazy age of Trump, leaving behind only bitter lessons. The big lesson is that the success or failure of a presidential system ultimately relies on the president’s character. A second lesson is that America’s chaos leads to global chaos.

It’s hackneyed to list the ways that one paranoid leader has managed to take apart America’s democracy. What needs to be remembered is that amid America’s chaos, the virus of authoritarianism has infected central Europe and Latin America as well. The last four years have seen democracy wither around the world.

As the narcissistic Trump gets pushed off the stage, it is natural to pay attention to the new leader’s character and personality. What is the character and worldview of U.S. President Joe Biden, elected after three attempts to win the presidency? Before discussing Biden’s character, we need to look back at how American presidents’ temperaments changed world history.

The 1968 presidential election was held amid intense internal and external pressures not unlike last November’s election. Half a century ago, America’s prestige as a global superpower was in freefall amid its deepening losses in the Vietnam War. Domestically, college students carrying out anti-war protests were shot and killed by the National Guard, and Dr. Martin Luther King Jr., a leader of the African-American Civil Rights movement, was assassinated in cold blood. The murder of Robert Kennedy, who was destined to become the Democratic Party’s presidential nominee, put the country in a bad situation. 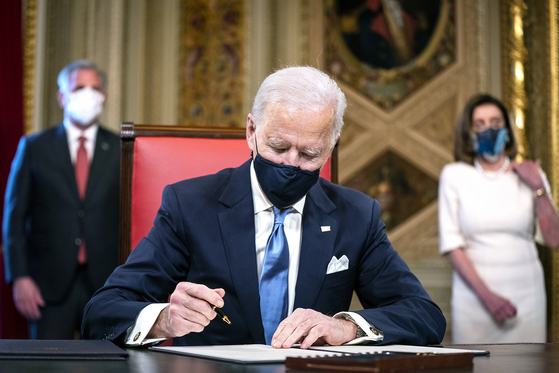 U.S. President Joe Biden signs three documents including cabinet nominations at the Capitol after his inauguration as the 46th president on Jan. 20. [UPI/YONHAP]

In the face of this extreme division and chaos, the figure who most accurately read the character of the victor of the 1968 election, Richard Nixon, was China’s leader Mao Zedong. After reading Nixon’s essay, “Asia After Vietnam,” written when he was a presidential candidate, Chairman Mao realized Nixon had a deep interest in normalizing relations with China, and ordered his subordinates to devise a strategy.

Nixon’s essay made no mention of Sino-U.S. détente, but between the lines Mao glimpsed Nixon’s pragmaticism and an ambitious strategic vision to change history.

Mao is long gone, but political scientists have developed methods to analyze the character and temperament of political leaders. Using the methods developed by U.S. scholars, I and my fellow leadership researcher Jeon Jin-a were able to infer Biden’s character and world view through his inaugural address. By analyzing the sentence forms used in the speech, we could get closer to deciphering the speaker’s understanding of political principles, the predictability of his politics, and the strategy and tactics he is willing to employ to reach his goals.

An analysis of his sentence forms shows that Biden is a moderate who leaned neither towards realism nor idealism. At the same time, he could be defined as an optimist who believes in the capability of politics to perform the art of compromise. In his speech, Biden stressed, “History has been a constant struggle between the American ideal that we are all created equal and the harsh, ugly reality.”

Centrist, optimistic leaders share certain distinct characteristics. First, they believe there are no eternal conflicts in the world of politics, as conflict and confrontation stems not from human nature but from humans’ lack of understanding. Therefore, the outbreak of conflict between countries, they believe, usually arises from misunderstandings between heads of state. For China, which is locked in a competition with the United States for global influence, this could be a positive signal. It can also be a sign of hope for Korea, which is deeply concerned about the deepening U.S.-China faceoff.

Second, moderate optimist leaders may not believe there are eternal conflicts in the world, but they believe the way one should approach others should rely on the dual principles of compromise and determination. They place a greater emphasis on compromise over conflict, but are not afraid of entering into a stalemate if relationships sour.

Simply put, Biden’s political nature is far more complicated than the passive idealism demonstrated by a politically inexperienced Barack Obama or the aggressive realism of George W. Bush. In other words, Biden’s political character is soft but multifaceted, and flexible yet resolute.

With the end of the Trump era, those who secretly hoped for the decline of American hegemony will be disappointed. By selecting a centrist leader with optimism — and with profound political experience — American voters showed the age of the United States has not ended yet.

At a time when many people have begun harboring secret doubts about U.S. potential, Americans have chosen a leader who understands the hypocrisy, paradox and irony existing between reality and idealism in the world of power politics, and who seeks both the realization of compromise and power. The launch of Biden’s leadership represents the return of the United States as well as the return of politics as the art of the possible.