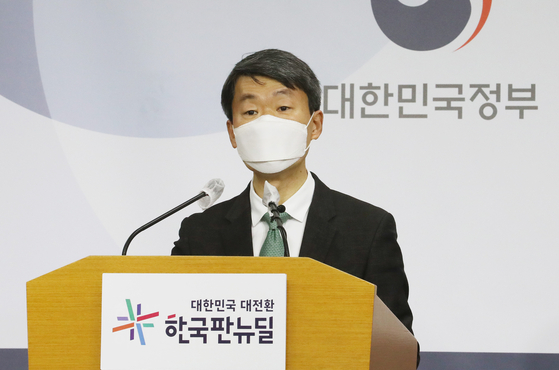 Na Seung-sik, deputy director of trade and investment, at the Ministry of Trade, Industry and Energy, announces January export results at the government complex in Sejong on Feb. 1. [YONHAP]


Exports last month grew on year, the first definitive sign the Korean economy is on the recovery track.

According to the Ministry of Trade, Industry and Energy on Monday, Korea’s exports in January grew 11.4 percent to $48 billion.

This is the ninth consecutive monthly trade surplus.

“The Covid-19 resurgence continues in the United States and Europe,” said Na Seung-sik, deputy minister for trade and investment. “Despite the negative effects of Covid-19, our exports have been recovering since hitting a low point in the second quarter.

“Our exports grew sharply in January largely thanks to IT goods, including semiconductors. New growth products such as those related to biopharmaceuticals and health also contributed to exports' growth.”

Biohealth exports have been growing year-on-year for 17 consecutive months, computers 16 months and semiconductor and consumer electronics for seven months.

In three categories, exports declined: petroleum goods (minus 46 percent), largely due to low international crude prices, textiles (minus 7.9 percent) and machinery (minus 4.8 percent).

The International Monetary Fund (IMF) projects Korea’s growth for this year at 3.1 percent, citing the country’s strong exports as a major factor.

“The outlook is for a recovery in 2021 with real GDP projected on a preliminary basis to grow 3.1 percent, supported by a gradual lifting of Covid-related restrictions and stronger external demand,” said Andreas Bauer, IMF mission chief to Korea and director of the Asia and Pacific Department during a videoconference held last week.

The Korean government in December projected the Korean economy to grow 3.2 percent, with the export growth goal at 8.6 percent.

Exports last year shrunk 5.4 percent, which was the second consecutive year in which exports dropped.

While emphasizing that strong exports last month played a significant role in cushioning the blow of Covid-19, Finance Minister Hong Nam-ki said the government will focus on the “Big Three” to further propel exports.

During a government meeting on Monday, Hong said the government will use all available means, including fiscal policy, tax benefits and financial support, to foster the “Big Three” industries.

“We will speed up [our efforts] in continuing the recovery from the beginning of this year,” Hong said.