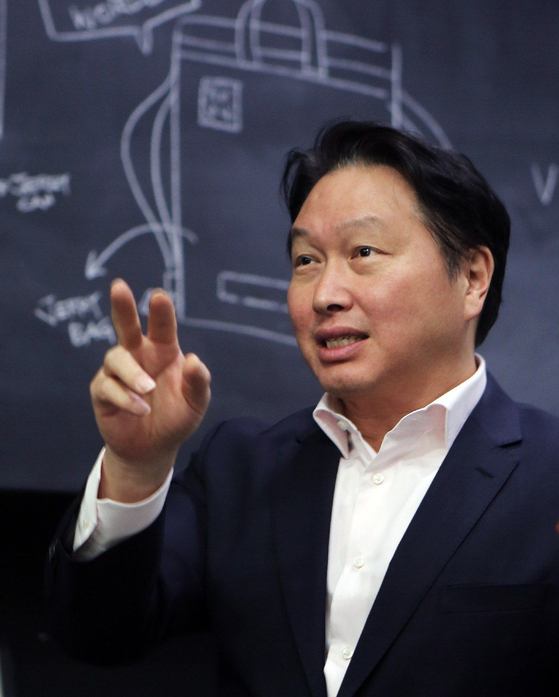 
SK Group Chair Chey Tae-won is set to be the next chairman of the Korea Chamber of Commerce and Industry (KCCI), the oldest corporate lobbying group in the country.

On Monday morning, KCCI’s chair committee recommended Chey to be chairman of the Seoul Chamber of Commerce and Industry. As is tradition, that would automatically make Chey chair of the KCCI as well, which oversees 73 offices nationwide.

As the KCCI chair represents Korean business in and outside the country, the chair committee gave high marks to Chey’s global communication skills, management performance and insights into corporate responsibility, KCCI said in a statement.

If Chey accepts the offer, he will serve as chairman of KCCI and the organization’s Seoul unit for three years. It would be the first time in KCCI’s 52-year history that a corporate leader from one of Korea’s four-largest chaebol — Samsung, LG, SK and Hyundai — would take on that role.

“I appreciate the recommendation,” Chey said in a statement, Monday. “I will deeply consider through which ways I could contribute to the Chamber and the country’s economy.”

Chey would be taking over the position from Park Yong-maan, former Doosan Group chairman, whose term ends in March this year.

The SK chairman was one of the earliest corporate leaders in Korea to emphasize and implement the importance of environmental, social and corporate governance (ESG).

His most recent move in this respect came last month when eight SK Group companies became the first group of Korean companies to join the likes of Google, Apple and General Motors in the Renewable Energy (RE) 100  — a global initiative to realize a 100-percent renewable energy goal by 2050.

The role of KCCI chairman would require Chey to be more critical of government regulations and social issues related to corporate heads. After assuming office in 2013, current KCCI Chairman Park was well-known for sharply criticizing regulators and the government.

The SK Group chairman would remain a core decision maker inside the company even if he does assume the KCCI chairman role, an SK Group spokesman said.

For KCCI as well, having the organization headed by a leader from one of Korea’s four-largest chaebol is a significant event.

Until 2016, the Federation of Korean Industries (FKI) was regarded the most influential business lobbying group, backed by strong support from the four groups.

All four left its membership in 2017 after the organization was battered in the political scandal surrounding former President Park Geun-hye. FKI was found to have pressured its member companies to donate to nonprofits indirectly connected to the president. FKI losing power elevated the KCCI as a lobbying group.

“In terms of size, [SK] is one of Korea’s top five groups so there’s no doubt that it is eligible to represent Korea’s economy,” Park told reporters as he was leaving the KCCI chair committee meeting, Monday.

“We’re at a transition period into the fourth industrial revolution. Looking at his experience and insight, [Chey] seemed to be the right fit to suggest our future.”